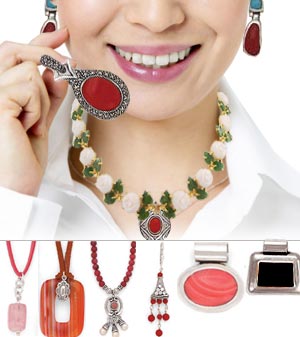 Learn about coral jewelry and how to care for it. Acquaint yourself with different types of corals - black, fiery red, salmon pink and unusual blue.

For ages, coral has been believed to be a talisman against evil spirits and harbinger of good health and prosperity. Examples of ancient coral jewelry dating back nearly 25,000 years can be seen in museums. Corals come in a range of colors - red, pink and black. Each type of corals has its own distinct features. The striking contrast of black coral jewelry differs from the delicate beauty of pink coral jewelry. Deep red and rich corals are by far the most popular. Learn to care for these precious gemstones composed of Calcium Carbonate.

Corals are organic substances that consist of the skeletons of certain polyps or marine invertebrates. Millions of polyps build their skeletons (made of calcium carbonate with a trace of carotene) on the abandoned remains of other polyps, creating the massive coral reefs that carpet the planet's ocean floors.

Coral is softer than other gemstones and is easily susceptible to scratches. Since it is a porous gemstone, it must be kept away from chemicals. It measures only 3.5 on the Mohs scale and the splendor of the coral will diminish if not taken care of. The intensity and quality of coral color increases with depth, but coral is very sensitive and can breed only in water temperatures between 13 and 16 degrees Celsius.

Corals are known to grow in deep submarine colonies at a slow pace. Corals of excellent quality are found in the Bay of Biscay, Cape de Verde Islands and the waters of the Mediterranean, Red Sea, Southern Island and Japan.

Unusual blue corals are found off the Cameroon Coast and are known as Allopora Subviolacea and Akor. Golden corals with a lacquered finish are found off the Hawaiian coast. Machine-made fake corals are used to mimic the gemstones but they are not a patch on the simple grandeur of real corals.

Coral jewelry from Italy is well known the world over. From brooches, pendants and earrings to belt buckles and pillboxes, coral jewelry is very popular. Corals also find their way into religious jewelry of India and China as well as rosaries and necklaces. Coral jewelry found pride of place among native Navajo and Zuni silversmiths.

Coral jewelry has a huge and growing market and coral reefs are becoming endangered. They are threatened by rapidly warming ocean waters, harmful bacteria, pollution, and destructive fishing methods. The availability of new coral is dwindling as underwater supplies are depleted. Some coral jewelry may contain specimens that have been bleached and dyed.

Do not get taken in by cheap coral jewelry, as it would mean cheap imitations. High quality corals are expensive. Corals will get damaged if immersed in water for too long. The water may also dull the polish of the coral making it look lackluster and unattractive.

Black corals or Antipathes Grandis were discovered off the waters of Maui in the late 1950s. The finest black corals used in jewelry come from Hawaii. Black corals contrast well with yellow gold jewelry.

The luster of black corals is deep and this rare gemstone is harvested according to strict state regulations in Hawaii. Black coral is exotic and dramatic and has long been considered to guard against misfortune.

Unworked black coral is dull but develops a vitreous luster when buffed and polished. It is sensitive to heat, acids, and hot solutions. Black corals can also be found in abundance off the Persian Gulf and the Mediterranean. Black corals do not form reefs or heads and are rare to find these days.

Rich red corals are found in the Mediterranean coast as well as the Gulf of Naples near Genoa. Oxblood red is one of the most valued in red coral jewelry. Red coral jewelry is said to be associated with the planet Mars and said to cool the fiery natures in people born under its influence.

Pink corals or Corrallium Secundum can also be found along the Hawaiian Chain from Oahu to the western coast. The pink of these corals ranges from a subtle salmon red to a hibiscus pink to pale whitish pink. These pink corals are fashioned into beautiful rings and chains. Pink coral jewelry is the traditional gift for the 35th wedding anniversary.