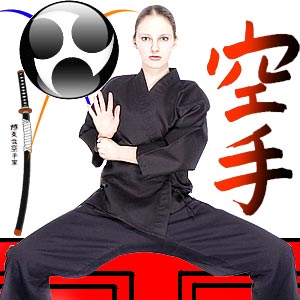 Karate aids to build a strong personality and promotes a sense of respect towards fellow humans. Traditional karate involves strikes and kicks and does not use weapons. Learn more about karate training for women.

Karate is an ancient Oriental martial art, a self-defense technique and above all a growing sport. Popular as a self defense martial art, karate is equally good for improving the body contours. Karate aids to build a strong personality and promotes a sense of respect towards fellow humans. Karate is useful to all, male and female, young and old. Traditional karate does not use weapons and involves strikes and kicks inflicted on pressure points of the opponent.

As a physical art, karate is a wonderful all-round exercise as this art form requires great vigor thus making any person highly energetic. It utilizes numerous body muscles in a balanced manner. Karate makes a person both physically and mentally alert and develops excellent hand to eye co-ordination and swiftness in a person. Karate strengthens the body and the spirit of a person.

Karate is more about self-discipline than anything else; students practicing karate must follow strict mental and physical discipline. Karate induces discipline, self-confidence and control over situations in its students. Karate integrates exclusive breathing techniques and shouts thus showcasing power.

Karate pays importance to striking an opponent rather than grappling or throwing the opponent. Fighters direct focused strikes with the hands, elbows, knees or feet towards the most susceptible spots of the opponent. In karate competitions, the opponents are allowed to strike each other only above the waist.

During karate training, the fighters are trained to breathe appropriately. They are also trained to strengthen their hands by striking blows into sacks of sand or rice and special punching boards. During training, fighters wear loose-fitting white uniforms that bear a resemblance to pajamas; these uniforms are called 'gi'. In traditional karate, fighters are not allowed to use any protective gear or protective pads.

Kihon: Fundamentals or basics of karate

Kata: Pattern or forms of techniques used in karate. There are numerous kata in karate and these help develop physical strength in a person.

Kumite: Meeting of hands is the literal meaning of kumite, it also means sparring. Modern karate emphasizes on the various forms of karate and various sparring methods employed in karate.

The world's most popular marital art, karate is over 1,400 years old and originated in Okinawa which now is a territory of Japan. The word karate in Japanese refers to bare hand. It shares common features with the Chinese Kung Fu.

Thought to have originated in the ancient Buddhist monasteries, most of the oriental martial arts were developed and refined when monks had to defend themselves against violent marauding opponents. Monks had the intricate knowledge of human pressure points and years of hard practice and the convenience of fellow practitioners to spar which made them formidable.

Monks practiced karate in the olden days for self defense. Karate is basically a blend of Kung Fu (a Chinese martial art) and Jujitsu fighting (from Japan). Karate does have features of other fighting systems such as Japanese sumo wrestling, Roman gladiatorial combat and weaponless fighting arts from Malaysia, Thailand, Vietnam, Laos and Cambodia.

Okinawa reeled under the Japanese and Chinese influence since the 14th century and its rulers banned the use of weapons so as to stop revolts. This led to the inception of weaponless fighting practices. The local Okinawan martial art was Te, meaning hand.

This art was combined with the Chinese Kung Fu and was getting popular as Kode Te, meaning Chinese hand. In the 19th century the Japanese became the rulers of Okinawa and rechristened this martial art as Kara Te, meaning empty hand. During olden days karate was taught secretively and this martial art had no written records.

Kicking techniques in karate are very powerful. Momentum is required to generate force; it is easily generated while kicking. Karate kicking is classified as:

Snap kicks: Striking action that recoils the moment impact is through. The leg is withdrawn just immediately after kicking.

Thrust kick: The leg is instantaneously stopped once it contacts the target and is locked in the same position. It is similar to a punch.

Common and popular kicks in karate

Mae Geri - Front snap kick: From a standing position the foot is hurled right into the target, striking with the ball or the heel of the foot.

Mawashi Geri – Round house kick: Striking with the ball of the foot; while doing so you should coil your toes up and attempt to roll your foot sideways.

Yoko Geri - Side kick: With your toes pointing downwards, kick with the blade of your foot.

Ushiro Geri - Back kick: This involves kicking behind you with the heel.

In traditional karate no protective gear was used but modern karate does use a few supportive gears. These gears help fighters while sparring in karate. Karate does not have any expensive or special gear. For beginners uniforms is the only requirement, as the person progresses the following becomes necessary.

Sparring gear: Hand pads and shin, instep pads, a gum shield and a hand gear is required after reaching higher stages in karate. The entire gear can cost you a maximum of $ 100.

Training gear: Martial arts should be practiced regularly, that means practice not just at the institute but at home too. In such a case you have to buy focus targets or kick bags, you can choose either a hanging bag or a free-standing bag. This will cost you between $ 20 –$ 10 depending on your budget.

Warm-up exercises: These exercises can last up to twenty minutes. Warming up exercises include stretching exercise, squats, push-ups, sit-ups, jogging, jumping, etc. Warm-up exercises make the body more flexible and improve blood circulation, stamina and strength. If students do not warm-up correctly before practicing karate they will end up having muscle pulls or injuries.

Basics: Strikes, punches, and blocks are taught in the basics, these are practiced in a standing position. This standing posture helps strengthen the lower torso.

Moving basics: Basic postures in moving positions are taught. Students are asked to punch, kick, or block while moving forward, backward or towards the side.

Kata: Kata is traditional karate movements, basic movements are combined with these movements.

Kumite: Sparring is taught in kumite. This training helps the fighter develop a sense of timing, distance, spontaneity and capability to receive and take strikes.

Karate is very useful for women/girls as a self-defense art and as a self-confidence booster. There is a steep rise in the number of women enrolling themselves in karate schools. Few techniques of karate require greater muscular strength and are not suitable for women thus women should choose the perfect technique that will suit and benefit them. Street karate is the most common version of karate chosen by women as this version of karate teaches them the best techniques for their kind of energy levels. Practicing karate shotokan kata routinely empowers women to pick up street karate effectively.

Street karate is not a style of karate but is a set of effective and powerful techniques for real life use against general acts of violence. Knowing about pressure points and the various techniques of mounting an attack against the right pressure point provides a level field against physically powerful male opponents. After all for women, it is the right technique which provides the best form of defense and not sheer power. Women practicing karate should focus on the below mentioned points to protect themselves from assaults.

Knowledge of karate: Should have learnt karate for a long period and should be well qualified in either a particular type of karate or in all types. Most of the karate instructors have black belts.

Expression: Karate instructors should communicate well and should be able to teach and talk to the student rightly.

Certification: Karate instructors have to be certified by an appropriate organization.

Experience: Instructors who have worked with well-qualified and well-experienced instructors turn out be good karate instructors.