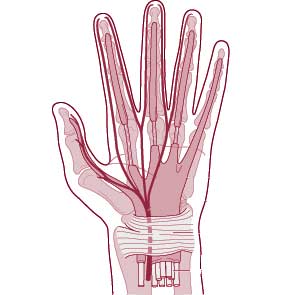 Carpal tunnel syndrome occurs commonly among people who perform hand-intensive jobs of a repetitive nature. Exercises can help in preventing the painful effects of this syndrome.

Carpal Tunnel Syndrome(CTS) is a condition that affects the hand and the wrist. It can result from injury to the wrist - dislocated or broken wrist bones or sprains. Carpal Tunnel Syndrome can also be caused by diabetes, rheumatoid arthritis or thyroid disease. Those who are at increased risk are computer users, violinists, golfers, meat packers, assembly line workers, hair stylists and mechanics since they perform the same hand movements repeatedly.

It leads to difficulty in performing tasks such as fastening buttons, turning keys and unscrewing bottle tops. Nearly 8 million Americans suffer from CTS. It has been noticed that three times as many women suffer from CTS as compared to men. Read on to find out more about the symptoms of carpal tunnel syndrome and the carpal tunnel exercises that you can perform to prevent it. These exercises do not take long and do not require any equipment.

This is one of two nerves that allow feeling in the hand. The median nerve also controls some of the muscles that move the thumb. It also provides sensations of temperature, pain and touch from the hand to the brain as well as sweating of the hand. CTS results when the tunnel walls are compressed, thereby putting pressure on the nerve. Carpal tunnel syndrome is particularly associated with tasks that involve:

Lubrication is essential for the normal and smooth functioning of the tendons. With excessive or repetitive activity on the carpal tunnel, the lubrication system may malfunction. It may not produce enough fluid or it may produce a fluid with poor lubricating qualities. This failure creates friction between the tendon and its sheath causing inflammation and swelling of the tendon area.

Symptoms of this condition usually start gradually - frequent burning, tingling, pins and needles or itching and numbness in the palm of the hand and the fingers especially the thumb and the index and middle fingers. In time, these symptoms can spread to the arm and shoulder. They tend to worsen at night or first thing in the morning since many people sleep with flexed wrists.

Carpal tunnel syndrome can affect one or both hands and the severity of the symptoms can vary. The hand muscles may become weakened, making it difficult to grip objects. It can also result in permanent loss of feeling. Fine finger movements, such as writing, may become increasingly difficult. In extreme cases patients might feel tingling during the day and the muscles at the base of the thumb may waste away. In some chronic cases people are unable to tell between hot and cold by touch.

These exercises should be repeated 10 times. Then the arms should be left hanging loosely at the sides. Shake them for a couple of seconds.