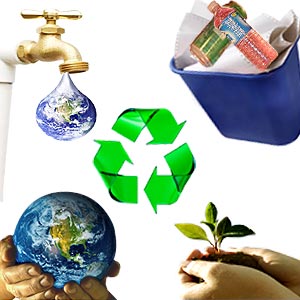 Many of Earth's resources are not renewable and we are fast using up her precious resources. Recycling reduces waste and saves energy. It conserves natural resources, saves landfill space, and reduces water and air pollution and green house gas emissions that cause global warming.

In the US, people throw away at least 162 tons of garbage every year - fit enough to fill 1000 football fields piled thirty stories high. And only 10% of America's trash is recycled. If only the garbage containing paper, glass and aluminum cans are recycled with other garbage, the trash would be reduced by about 25%.

Recycling an existing product uses considerably less energy than sourcing and making one from new. While it has been found that approximately 60% of rubbish thrown away could be recycled, a survey reveals that 9 out of 10 people say that they would recycle more if it was easier.

The process of recycling

'Reduce, Reuse and Recycle' is the key concept behind any waste management. The process of recycling involves used materials to create new products. In this process, energy usage, air and water pollution are reduced and there is reduced need for conventional waste disposal and lower green house gas emissions.

First and foremost, recycling process saves natural resources. By making products from recycled materials instead of virgin raw materials, mother earth is conserved and there is reduced need to drill for oil or dig for minerals.

Recycling saves energy. To make recycled products, it requires reduced energy. One example could be aluminum which takes 95% less energy than a new one from bauxite ore.

Recycling saves landfill space. The waste that was earlier dumped when recycled into new products does not go into landfills or incinerators. Therefore landfill space is conserved.

Recycling saves money and creates job opportunities. While recycling can be the least expensive waste management method in cities and towns, it creates more job opportunities than landfills and incinerators.

If only the Sunday papers are recycled in America, more than 500,000 trees can be saved every week. While more than 95% of all canned drinks are sold in aluminum cans, old aluminum cans could be used for new. As such aluminum cans are made out of bauxite and the process is not only expensive but also energy consuming. Nowadays we find recycling centers paying millions of dollars to adults and children for collecting aluminum cans and other aluminum products.

While close to 60 billion pounds of plastic are produced every years, at least 25% of it is used to package food. Nearly two million birds and more than 100,000 mammals are killed in a year by discarded plastic. While scientists are trying to decompose plastic, there are plastic containers that could even take 100 years to decompose in addition to others like Styrofoam cups, plates, and boxes which do not decompose at all.

Recycled plastic is being used in park benches, landscaping timber, and play ground equipment. These last 400 years and do not need to be painted. They do not wear out and motor oil can be used to clean them if dirty.

An astounding 200 million tires are thrown away every year and 35% truck tires are recapped and so are 5% to 10% car tires. They are given new treads to be reused.

At least 18% of solid wastes come from trimmings of trees, bushes, leaves and grass clippings. This can be reduced by composting. These compost ingredients can enrich the garden soil and control weeds around garden plants.

Garbage is burnt to make electricity. This can be used to heat and light houses. While on one hand the scientific community works to reduce air pollution from the gases and ash from burning garbage, schools and youth groups collect paper, glass and aluminum for fund raising.

If households in the US installed water efficient appliances, the country could save more than 3 trillion gallons of water and more than $ 18 billion dollars per year. Nearly 80,000 tons of gas emissions can be avoided if one out of every 100 American homes were retrofitted with water efficient fixtures. And significantly, the greenhouse gas savings would be equivalent to removing about 15,000 automobiles from road for one year.

Electricity production is the leading cause for industrial air pollution in the US. It is responsible for 40% of nation's carbon emissions that contribute to global climate change.

It is found that almost half of the average home energy is consumed for heating purposes. Whereas improperly sealed windows can account for at least 25% of total heat loss from a house, lighting consumes up to 34% of electricity in the US.

Compact fluorescent light bulbs produce the same amount of light, and use one third of electricity and last up to ten times as long. If only every household replaced its most often used incandescent light bulbs with energy saving bulbs, electricity used for lighting could be reduced by half.

Producing recycled paper requires only about 60% of energy used to make paper from unused wood pulp. Recycled paper causes around74% less air pollution and 50% less water. And it is heartening to know that more than 56% of the paper that was consumed in the US during 2007 was recovered from recycling. If we examine what recycling at least 1 ton of paper could do - it can save 17 manure trees, 7,000 gallons of water, 3 cubic yards of landfill space, 2 barrels of oil and at least 4,100 kilowatt hours of electricity - which in turn can power an average American home for about 5 months.

As glass never wears out it can be recycled forever. The glass bottles and jars thrown away by Americans can fill the foot towers of the former World Trade Center. Recycled glass form 25% of most bottles and jars. There are some states in the US which have bottle deposit laws. In these States at least 40% less glass litter by volume can be observed.

One study very poetically adds that if only all the glass bottles and jars collected through recycling in the US were laid end to end, they'd reach the moon and half way back to earth.

On a typical day on our planet Earth, human beings add fifteen million tons of carbon to the atmosphere, destroy 115 square miles of tropical rainforest, create seventy two square miles of desert, eliminate between forty to one hundred species, erode seventy one million tons of topsoil and last but not the least, and increase their population by 263,000. Askance? God save planet Earth !

Top of the Page: Recycling Facts
Tags:#recycling facts; why recycle