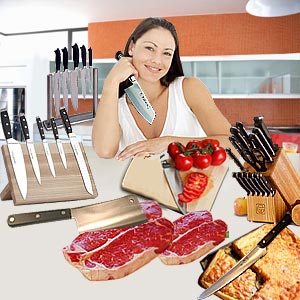 This informative article on different types of kitchen knives and their specific uses throws light on storage and maintenance of knives too.

Knives can be classified according to their functionality. The shapes and the styles of the knives determine the kind of task they perform. Knives can be primarily categorized as chopping, slicing and striking knifes. Slicers can again be divided into those that are used against a cutting board and those that are not.

The Chef Knife is popularly called the 'work horse' of the kitchen. It has a broad blade can range in length from six to twelve inches. The eight inch chef knife is the most common. The Chinese Cleaver is an Asian version of the original French Chef Knife. The Japanese version comes with a less broad blade called Usuba which most westerners find easier to handle.

The Chef Knife is usually attached to a cutting board. It is rocked on its gently curving edge using the tip as a stationary pivot. The back of the Chef Knife is used to break the bones of chicken and scrape foods from boards. The flat side is used for crushing garlic.

Generally meat knives tend to be made of high carbon stainless steel material to retain the cutting edge for long. They come in many sizes depending upon their intended use - Carving Knife, Meat cleaver, Slicing Knife, Boning knife and so on.

A Carving knife is a longish knife - around 10 inches in length but is thinner than a Chef knife for a reason - it needs to cut or carve thin slices of meat. To carve cooked meat, it pairs with a carving fork of about the same size.

Striking knives are used in a manner similar to the way one would use a club. Cleaver is perhaps the most common striking knife. It is used to sever bones and joints in meat preparation. A meat cleaver is large, rectangular knife used to cut meat. The blade is about six inches long. These types of knives are heavy and come with a thick spine enabling the knife to chop through the bone and joints with relative ease. Many cleavers have a hole in the end so as to allow them to be easily stored on a rack.

Most slicers have narrow thin blade usually eight to twelve inches long. They are used for cutting thin slices of food especially meat. A more flexible a slicing knife, easier it is to use. Slicers that are not used against a cutting board are the parer, filet knife and boning knife.

Paring knife: Parer is usually held with one hand while the food to be cut is held in the other. It is used to peel or prepare vegetables and make decorative cuts in fruits and other food stuffs. Sporting a short blade, a parer is no more than about four inches in length and comes in a wide variety of shapes and curves. The paring knife is the handiest for eyeing potatoes and boning chicken. It is unsuitable for hazardous jobs and cannot be used for large and chunky food stuffs.

The filet knife is used to free fish filets from skeleton and skin. It has a thin blade and is often flexible but razor sharp. The filet knife, oyster knife and the clam knife are all specialty knives. While the oyster knife is small, double sided knife with a thick and stiff blade that has rounded sharp edges, the clam knife is narrow with a stiff blade designed specifically for clams.

The boning knife is used to separate poultry from its carcass. The short slicing strokes of a boning knife separate legs from body and breasts from skeleton. These slicers come with a scimitar style tip to assist in cutting tight spots. The boning knife comes in five to six and a half inches length.

Smaller slicing knives are used for preparing sushi and are found sharpened on one side and flat on another side. Ceramic knives make excellent slicers because of their thinness and incredible sharpness.

Utility knife: This is an all purpose knife and is about six inches in length and narrow. This is intended for those who feel that the chef knife is too large and cumbersome to handle.

Steak knife: This is a smaller knife used at the table to cut through especially tough foods such as meat. It is a somewhat serrated utility knife though it has a different utility purpose. A streak knife is usually four to six inches long, about the size of a butter knife. It is important that steak knives are kept sharp as blunt knives require more force to use and can cause injury. Most of these knives come decorated since they are set on the table with the silverware.

Bread knife and Tomato knife: These come with serrated edges which enable piercing of the hard crust or skin without bruising or crushing the delicate insides. They cannot be easily re sharpened as the primary cutting edge is in the carved part of each serration that rarely would need sharpening.

Ham slicer: Known as Granton or Kullenschlilff, these slicers are different from a regular slicer. There are hollows along the edges of the flat blade alternating in location between the two sides making it look like a series of serration. They produce ultra thin slices from most fish and boneless meat. These knives are fragile though legendary for Roast beef and Lox slicing and crumbles slicing of layer cakes.

Mezzaluna: This is a half-moon shaped mincing knife that has rounded blade. It is a uniquely designed knife that is perpendicular to the cutting surface with a semicircular blade. A Mezzaluna is used to mince foods on a cutting board or in a wooden bowl. It is perfect for making quick and easy cutting of herbs and nuts as it has a highly curved blade making a good rocking motion with a circular bowl shaped indentation that matches the curvature of the knife. Some large Mezzaluna are used to cut pizza though a rolling pizza cutter is more common for this purpose.

De-vein is a small knife used to remove the vein from the back of shrimp. A chestnut knife is used to score a chestnut with an 'x' cut prior to roasting so that steam does not build up inside and cause the nut to explode.

Tourner: Usually referred to as a bird's beak or peeling knife, the curved blade of this short knife is used to peel vegetables or make decorative cuts when making vegetable garnishes.

A grape fruit knife is serrated on both sides with a curved tip; a knife used for frozen foods comes with a coarse saw like teeth. The knife used for cheese is cut out in the flat of the blade or anon stick edge and has an upturned pointed tip used for serving.

This is used for slicing hard to slice foods. Electric knives are less physically exhausting as they require very little effort and this makes it easier to make cleaner and faster slices.

The device consists of two serrated blades that are clipped together. The blades continuously move sideways and provide the sawing action when it is switched on.

A Japanese sushi knife is distinguished from the western knife by material and sharpening. Traditional sushi knives were made of incredibly high quality carbon steel, similar to Japanese swords. But the average sushi knife found in the kitchen does not boast of such high quality material but made of top end stainless steel.

Kitchen knifes can cause serious injury if not used safely with skill. Certain basic tips and hints come in handy while using a kitchen knife:

Knives are made of several types of materials. Plain mild steel knives are cheap and available in all sizes and shapes. They form a patina over a period of time which will not allow further rusting. They need to be stored dry and require regular honing to keep their edges sharp. High carbon stainless steel which lasts longer is one of the most expensive and ideally recommended. A stainless steel knife will not stain and holds a sharp edge longer than other types if additional trace elements like molybdenum are included and made with special alloys.

Ceramic knives are popular these days as they do not need sharpening for years together. But these knives have to be used only on a cutting board and never on another ceramic, plastic or glass surface. Ceramic Knives need to be professionally sharpened and must not be honed at home. They are brittle and require care in usage.

Titanium which is a matrix of titanium and carbides is also used. Titanium is lighter than steel. Titanium alloy knives can be used for boning and filleting but not for decorative cuts as they are more flexible than steel.

Each knife is designed for a specific use and should be used only for that purpose. They should not be used to pry lids or cut against hard surfaces. If given adequate care, they last a life time. Many Kitchen Knives come in a set sheathed in a soft wooden receptacle. Buy a Honing Steel to straighten the edge and a Sharpener to sharpen the edges.