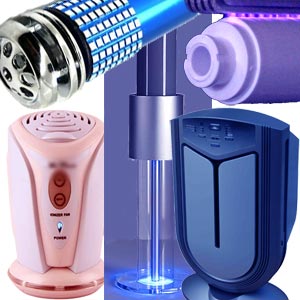 An ionizer is a device that purifies the air around us and eliminates tiny allergens from the air. From cars to homes and offices, ionizer air purifiers are used to clear the air of positively charged particles, like bacteria, pollen, dust, smoke and allergens.

An ionizer is a device that 'purifies' the air around us and eliminates tiny microscopic allergens from the air, by ionizing the air molecules and electrostatically precipitating the pollutants. Ionizers are mostly used in air purifiers. An ionizer creates negative ions to purify the air and does not need to use fans and filters although some do.

People suffering from allergies, asthma, respiratory ailments and impaired immunities benefit the most from these ionizers as they remove the allergens circulating in the air. An ionizer is a perfect solution for tackling mild pollution problems indoors. Ionizers are considered a better substitute to the traditional air filters both on cost and performance.

Functioning of an ionizer

Ionizers work based on the chemical properties of sub-atomic particles. An ion is either a negatively or positively charged particle. Ionizers utilize electrode pins that are charged using high voltage to generate negative ions (anions). The negative ions flood the room space and enable precipitation of positively charged particles like bacteria, pollen, dust, smoke, allergens and the like.

The negative ions released and the positive allergens bond as they bear opposite charges. After bonding these particles become too heavy to remain airborne. Consequently these harmful airborne particles settle down on the grounded plates that can be cleaned easily. These gadget are available as tabletop or stand alone units.

High voltages produced by these generators - also results in the creation of Ozone although most well designed units should emit insignificant levels of ozone. Serious concentration of Ozone indoor can worsen chronic respiratory diseases such as asthma and compromise the ability of the body to fight respiratory infections. California Air Resources Board had announced a ban of in home ozone producing air purifiers because of these health concerns.

Ionizers come in many sizes and shapes. But they all have one thing in common - a source of high voltage and a high voltage diode. Simple cheap devices use an isolation transformer with a chain of diodes/capacitors to multiply the household mains supply of 110 V (in Europe and in Asia 220-240V AC) to about a few KV.

Although the voltage may be high, the short circuit current will be less than one milli ampere - thus electrocution through an Ionizer is improbable. Upscale models typically use a COB(chip on Board) device which drives a high frequency high voltage transformer (like the Line output transformer from a TV). These devices are capable of producing several hundred million ions per second. Some even sport a small fan behind the array of electrodes to effectively spread the ions around.

Ionizers work best within a specified range of humidity level. Ideally they need a drier atmosphere than a damp humid atmosphere. The humidity will cause excessive arcing and may result in the production of Ozone. Relative Humidity of 80 % and above may impact the workings of many Ionizers.

These ionizers can reach up to only three feet from the ground as the negative ions have a life span of about 30 seconds from when they are emitted into the air. Ionizer models that have a fan can be effective up to seven feet from the ground level. Ionizers vary from each other in air ion production and their purifying performance also declines over time. Emitter needles also vary from each other; cheaper needles oxidize and corrode easily while expensive platinum needles last for a longer period.

Ionizer air purifiers are available in various models. Models that can be fit close to the ceiling are more efficient than models that are placed on the ground level as they have a better reach to allergens suspended in air.

Cars are a haven for airborne pollutants. Dust, exhaust particles, smoke, pollen and other particulates can seriously affect the quality of the air inside a car. A car ionizer cleans and freshens up your car as it efficiently removes all airborne pollutants. A car ionizer generates negative ions that bonds to the pollutants in the air and thereby removes them from the air. Benzene - a carcinogen is released when certain plastics or synthetic fabrics or paint material is exposed to the heat and Ultra Violet radiation, so common in a parked car baking in the sun. Car Ionizers and a judicious ventilation of the Car after you get in might be worth the trouble.