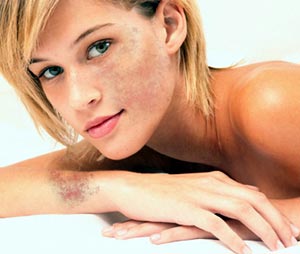 Understand the different types of skin pigmentation conditions that can result in uneven and blotchy skin tone. Trace the causes abnormal pigmentation and how it can be tackled.

The color of your skin is determined by the melanin or pigment in the skin, be it yellow, dark brown or black. Melanin is responsible for imparting color to your skin, hair and iris of the eyes. Levels of melanin depend on race and amount of sunlight exposure.

Hormonal therapy, childbirth or birth control pills can cause skin pigmentation changes. Many people suffer from skin pigmentation problems as a result of locally increased skin pigment production. They appear as age spots, moles, liver spots or hyper pigmentation after local skin damage. Freckles are another variation in pigmentation of the skin. They are caused but by uneven release of the pigment.

Hypo pigmentation or loss of skin pigmentation is a condition where the body does not produce sufficient melanin. Sometimes after an ulcer, blister, burn, or infection heals, the skin loses some of its pigment in that area.

Albinism: This leads to a situation of albinism wherein the person has light skin, white or pale yellow hair and gray eyes. Albinism is usually the result of an inherited recessive trait. There is no cure for albinism, and individuals should use a sunscreen at all times because they are much more likely to get sun damage and skin cancer.

Vitiligo: Vitiligo is another form of hypo pigmentation caused by the loss of pigment-producing cells in the skin (melanocytes). These white patches are very sensitive to the sun. This skin pigmentation disorder affects nearly 2% of the population and is more evident in those with darker skin. Some scientists believe Vitiligo may be caused by an autoimmune disorder. It is also linked to hyperthyroidism and Addison's Disease that affects the adrenal glands.

Treatment for Vitiligo involves use of light-sensitive drugs in combination with ultraviolet A treatment. Physicians may prescribe a combination of photosensitive medications like trimethylpsoralen and ultraviolet light therapy to darken the spots affected by Vitiligo. Skin grafting and cosmetic concealers can also be resorted to.

Hyper Pigmentation is a condition where the body produces too much melanin thereby causing to become darker than usual. Hyper pigmentation can occur due to excessive sun bathing or drug reactions. Many a time wounds and scars leave a darker patch of skin. Birthmarks, moles, and aging spots are also indications of hyper pigmentation. It is important to keep on the alert for any change in size, color or texture for indications of skin cancer.

Lichen Simplex Chronicus: This skin pigmentation disorder is characterized by dark patches of skin accompanied with severe itching. This can lead to permanent scarring and infection if untreated.

Birthmarks: This type of skin pigmentation appears at birth or in the few weeks following birth. These birthmarks do not generally pose any health risks.

Port-wine Stains: These skin pigmentation spots are caused by abnormal development of capillaries and appear as a red or purple mark on the body.

Hydroquinone is widely used to block formation of new melanin. Retin-A is also prescribed to counter the effects of hyper pigmentation. Topical steroid creams can help alleviate itching associated with some form of skin pigmentation. Cosmetic procedures like glycolic acid peels help in improving the effectiveness of the bleaching agents. Skillfully applied makeup can help in covering affected areas of the skin. Hypoallergenic cosmetics can be used to cover uneven and blotchy skin.