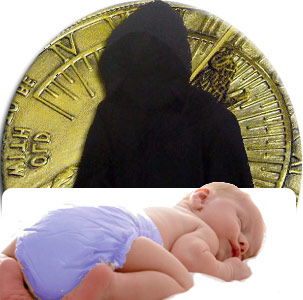 SIDS or Sudden infant death syndrome is a medical term used to describe the unexplained and sudden death of a child under age 1. Learn the risk factors that contribute to SIDS as also ways to prevent SIDS.

Referred to as 'cot death' or 'crib death', sudden infant death syndrome (SIDS) is a medical term used to describe the unexplained and sudden death of a child under age 1. More importantly, an autopsy does not reveal any explainable cause of death.

The pity here is that most victims of SIDS appear healthy prior to death. In most instances, the babies typically feed normally prior to being put to sleep in bed. The infant is suddenly discovered to be lifeless, without any pulse or respiration. Even if cardiopulmonary resuscitation (CPR) is initiated, evidence shows no benefit from it.

Statistics reveal that SIDS affects around 7,000 babies in the US each year. SIDS is suspected when a healthy infant who is younger than 6 months is found dead in bed. SIDS is rare during the first month although it peaks between 2 and 4 months of age and it seems to occur in infants younger than 6 months of age. SIDS can affect boys more than girls. Most SIDS death occurs in winter.

Although the exact cause of SIDS is unknown, many in the medical fraternity believe that SIDS can be caused by several factors. These include:

Signs and symptoms of SIDS

In almost all instances, SIDS happens without any warning, sign or symptom. Most of the time, the infant is thought to be sleeping. Infants could experience Life threatening events (ALTes) in which abrupt changes in their breathing, color and muscle tone can be detected. Viral respiratory infection, gastroesophagael reflux or seizure could be causes for ALTes. But there is no definite scientific evidence to link ALTes and SIDS.

An autopsy does not confirm the cause of death. Probably, they may help add to the existing knowledge of SIDS. In most cases, as the death is sudden and unexplainable, the state law requires an autopsy to be done.

The American Academy of Pediatrics recommends the following guidelines to prevent SIDS from occurring.

Maternal smoking during pregnancy is a major risk factor in almost every epidemiologic study of SIDS.

Smoke in the infant's environment after birth has also emerged as a separate risk factor in some studies.

As the risk of SIDS is reduced if the infant sleeps in the same room as the mother, the crib or cradle of the baby should be close to the mother.

Infants should be lightly clothed for sleep. Over bundling the baby should be avoided.

Avoid the infant having to spend excessive time in car seat carriers and bouncers in which there is pressure applied to the occupant. Upright cuddle time should happen.

In case your infant is not moving or breathing properly, please rush to the doctor. Never wait. Above all, it is better that parents of infants are trained in CPR.

Those parents who have lost a child to SIDS need emotional support. The National Foundation for Sudden Infant Death Syndrome assists with counseling and reassuring the parents and families of SIDS victims. Since there is no cause for death, parents are most often left with a feeling of guilt. Family counseling is recommended to help the siblings and other family members cope with the loss of the infant.