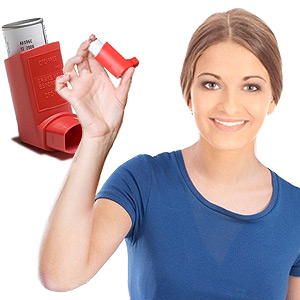 Many misconceptions about asthma float around. The most common is that infants with asthma will not be able to play sports or engage in strenuous physical activities as they grow up. If true, today's celebrity sports personalities like David Beckham, marathon runner Paul Radcliffe, Olympic swimmer Rebecca Adlington and many others would not have scaled the heights they have. All have been able to triumph over asthma and respective on-field competitors as well. In fact, being active and playing sports contributes to strengthening of lungs and helping them function well.

In adults, asthma is considered to be chronic though children can outgrow it. Asthma in infants can be treated and even cured. Here is information about asthma in infants. From symptoms, to diagnosis and treatment - thorough information about asthma in infants can help put an end to those traumatic sleepless nights. Soon, the baby will be on the way to enjoy good night's sleep. Feel rest assured that an infant with asthma could lead a normal life just like others of the same age.

Asthma affects the bronchial tubes or airways. A normal breathing process means air moving in and out of the lungs. But for those who experience an asthma attack during the process of letting in air and out, airway linings swell and the muscles around the airways tighten. When the airways tighten or get narrow, it is difficult for air to move. The inflammation of airways produces thick mucus. The airways get clogged with mucus. As a result, the person feels short of breath, breathing and exhaling becomes difficult. There is continuous coughing and wheezing too.

Recognizing asthma in infants can be very difficult. The infant doesn't know to communicate, can't verbally express. Infants have much smaller bronchial tubes. Even if there are small blockages it can result in swelling and tightening of the airways, making breathing difficult. Also, the symptoms can mimic those related with other health issues.

The symptoms can be confused with a viral infection, GERD, lung immaturity, pneumonia and sinusitis. Parental instincts work well. Clear understanding of symptoms is pertinent. Keeping a track of symptoms, the frequency of occurrence and bringing it to the notice of pediatrician is very important.

The most common asthma symptoms in infants' are:

Symptoms peak at night. One may wonder why the symptoms aggravate at night or early morning. It can be due to one or a combination of these reasons.

Causes of asthma in infants

Asthma in adults or in infants, the exact cause is still unknown. Medical experts believe that it can be a combination of many factors. Symptoms that relate to respiratory system, usually are a result of what we breathe not what we eat. Here are the factors, which have been identified.

Allergies/Triggers: Inhalation of allergens is found to be a cause for asthma in infants. The trigger can be anything from perfumes, smoke, spores, and cold air, allergens that cause allergies like dust mites, mold, pollen, animal dander, cockroach debris, household chemicals, or certain types of viral infections.

Genetics: A genetic link of asthma in infants has also been recognized. But, the gene or genes that are involved in inheriting asthma has not been established. In the US, 5% of infants with asthma have an immediate relative diagnosed and treated for asthma.

Childhood development: The immune system of a newborn is very sensitive during the early months. It could be underdevelopment of respiratory organs, abnormal development and growth of lungs, lungs not fully developed - all these make the infant more susceptible to cold and other upper respiratory infection such as cold, flu, sinusitis or bronchitis. These conditions increase the risk of asthma in infants. Also, asthma is more prevalent in premature infants.

Other factors for asthma in infants

Uncontrolled and persistent asthma can damage the lungs over time. If symptoms are recurrent and not isolated, the parents should seek medical attention without any delay. The diagnosis involves understanding the pattern and causative factors. The doctor may ask questions to confirm prevalence of asthma in close relatives of the infant, other allergies and respiratory virus infections.

Certain tests will be prescribed to diagnose asthma. The infant will have to exhale air into a device peak flow meter that records the rate of the airflow. Skin tests will be conducted to understand if the infant is allergic to any particular substance. A chest x-ray will be done to check presence of infections.

Even before test results are ready, anti-inflammatory medications will be given to suppress and control symptoms. The doctor will keenly observe if the symptoms improve. These medications are sans any side effects and are absolutely safe for the infant.

Treatment of asthma in infants

After confirmation of tests, depending on the severity and frequency of symptoms, an infant asthma plan will be drafted. Treatment of asthma is two-fold. Firstly, identify triggers and avoid them and secondly through medications.

It could be a continuous treatment or only when the infant is in distress. Medications may be in oral liquid form or the doctor may advice using an inhaler with a spacer or through a nebulizer. The doctor will guide using nebulizer in infants, usually when the child is sleeping. It is important to follow the advice of the doctor for the treatment to be effective. The doctor may also suggest modifying the environment to rule out asthma triggers. Periodic modifications will be effected in the initial draft plan depending on the symptoms.

Infants grow out of asthma

50% of infants grow out of asthma as they grow up, some by the time they reach school-going age. For some it may take a bit longer and by the time the kids reach adolescence, they grow out of asthma. But if left treated, it can cause severe damage to the lungs. Certain measures to gain control over asthma prove helpful in the long run. As the infant grows up, parents should educate the kid to keep away from certain activities that can trigger asthma. This is possible by maintaining a record of symptoms experienced, the frequency/period of asthma attacks.

Here is what a parent can do to soothe the distress faced by an infant with asthma.

Top of the Page: Asthma in Infants
Popularity Index: 100,307