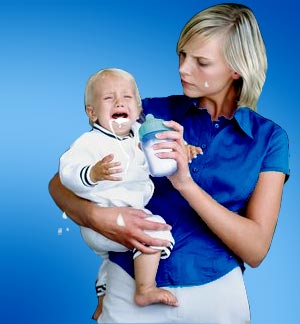 Infant reflux occurs in small infants and usually settles over time. Find out how this condition is monitored and treated.

Infants and little kids are known to spit and bring up food. It can be very distressing and confusing for a new mother to face a little infant who constantly spits up food. Infant reflux can make the child very uncomfortable and irritable. Infant acid reflux is characterized by frequent bouts of regurgitation, soon after meal times. If left untreated, it can lead to poor weight gain and growth. Find out the typical symptoms of infant reflux and to manage the condition.

Infant reflux is technically referred to as Gastro -Esophageal reflux (GERD). It typically happens due to relaxation of muscles at the bottom of the esophagus. Reflux is considered a result of poor coordination between organs of the upper digestive system. In some infants, acid reflux may be caused by abnormal anatomy of the esophagus. Reflux may also occur when the stomach is too full and the infant increases abdominal pressure by coughing, crying or defecating.


Whenever there is a bout of infant acid reflux, the infant will be distressed and may cry since the acid from the stomach will irritate the esophagus. Most infants affected by acid reflux show symptoms in the first week itself. Growth and weight gain is adversely affected by this condition. If you notice your body vomiting often and show discomfort during eating, you might need to consider infant reflux condition. Often small infants outgrow acid reflux conditions over time.

Effective management of the condition is vital to keeping infant acid reflux under control. Parents might be advised to thicken the feed. Thickening an infant's formula with cereal will decrease crying and the volume of vomiting. Keeping infants and young children in a semi upright position following feeding may help. The child must not be placed on its back to change the diaper, on a full stomach. Breast-feeding can bring some relief from infant reflux.

The physician may prescribe medication to reduce the acid the stomach produces. Some medicines are used to improve the functioning of the stomach and digestive system. This goes a long way in reducing instances of infant acid reflux. Timely administration of medication is critical in the treatment of infant reflux. Since medications metabolize faster in younger children, it may be necessary to administer more frequent doses. Sometimes doctors treat infant reflux with antacids. The commonly used ones are ranitidine, famotidine and nizatidine. In case a child is allergic to a particular formula, it might be necessary to switch to a hypoallergenic formula.

A child suffering from acid reflux may or may not actually throw up. Some may swallow the refluxed material while others may not reflux enough for it to come out of the mouth. Nevertheless such acid reflux episodes are damaging to the esophagus. Silent Infant acid reflux can be a cause for concern when the baby loses most nutrition and doesn't gain weight properly. A pH probe is very useful in detecting silent infant reflux. It is worsened if there is any protein or other allergy. In some cases, the regurgitated food may get into the lungs and result in chronic cough or asthma.

Barium test is a diagnostic procedure where the child needs to swallow a small amount of barium. The barium outlines the esophagus, throat and upper intestine so as to allow the doctor to view the food as it passes through the its route. But it is not always to diagnose the cause for reflux with this procedure unless the child experiences a reflux during the test. Another variation to this diagnostic test for acid reflux in infants is to make the child swallow radioactive solution and then use x-rays to measure the frequency of reflux episodes. Usually the child is made to lie on a table for this procedure. Endoscopy helps view the child's mouth, esophagus and stomach to look for causes of reflux.

Symptom of acid reflux in infant

Some of the symptoms of acid reflux in infants include poor weight gain and frequent weight loss. A child suffering from acid reflux may not experience all the symptoms. In fact in cases of silent acid reflux infants, it may be quite difficult to understand the condition in the initial stages. Infant acid reflux symptoms are noticeable during feeding time while there may not be symptoms during other times.

It might help to get the infant to burp frequently during each feed. Avoid any pressure on the infant's abdomen after mealtime. You can try feeding an infant suffering from acid reflux with small and more frequent meals.