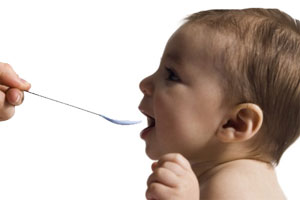 Parents should educate themselves about infant nutrition information and keep track of what the infant is eating and in what quantities. After all, the caloric need per pound of body weight is highest during the first year of life.

Nutrition and nurturing are crucial for lifelong health and well being of any new born baby. Good nutrition starting from birth is imperative to build and foster the foundation of a healthy life for an infant. An infant's weight almost doubles after about the first five months and triples by the first birthday by which time the length of the infant also increases by half.

The nutritional content in an infant's diet is provided by protein, fat and carbohydrates. About 50% of the protein is used for growth in the first two months of life. Fat provides 40% - 50% of the calories supplied during infancy and is a source of essential fatty acids. Carbohydrates and primarily lactose are the principal source of dietary energy in an infant. Water requirement for the infant is met during the first six months through breast milk or infant formula feeds. Read more on crucial aspects of infant nutrition.

Instant formula: Infant formula is substitute for human milk. No two babies are the same and it is essential to choose the right type of formula for the baby. Instant formulas come in two different types - the ready-to-use ones which can be poured straight into the bottle and the dried powder formula. Infant formula should be stored in a closed container tightly after each use. It is recommended to keep the product in its original packing. Beware that open liquid formulas should be discarded immediately after use. An infant liquid formula should be used within forty minutes of preparation.

The composition of such infant formula comes under FDA regulations as infant formulas sometimes become the only source of nutrition for infants who are not breast fed and hence have special role to play. Great care should be taken while choosing alternative feeding options in choosing formulas, correct mixing instructions, equipment and sterilizing techniques.

Cow's milk: Whole cow's milk is generally found unsuitable for all babies as it does not meet their nutritional requirements during the first year of life. Sometimes cow's milk can cause allergic reactions.

Soya milk: Soya based infant formula is being extensively used as an alternative to cows' milk on those infants who are lactose intolerant. Unless there is specific medical recommendation, it is advised not to use soya based formula on infants below six months of age.

Usually after six months, babies begin to outgrow their liquid diet or breast milk. The liquid diet does not supplement them with adequate nutrients to support the increased rate of growth and nutritional requirement of an infant after six months. The introduction of solid foods to a child's diet is called 'weaning'. Some parents prefer to cook food for the infant at home whilst cooking for other family members. Such baby feed can be prepared as and when needed.

This second stage of childhood nutrition is a transitional stage. This is the time to introduce soft foods, finger foods and family foods to the infant. Infants cannot consume large quantities of food in one sitting at a given time. They should be fed in small quantities at frequent intervals. Foods that have semi solid consistency are easy to swallow for the infant.

Soft, bite size pieces of food probably starting with soft fruit and vegetable pieces, pastas, graham or saltine crackers can be introduced. Utmost attention should be given while feeding the child as there could be unattended cases of choking during such times. Raw carrots, peanuts, whole grapes, popcorns and chewing gums that pose the danger of choking the infant can also be avoided. Gradually the infant toddler nutrition begins to resemble that of the other family members. It consists of three meals and two snacks with rich dairy products.

By and large the requirement of calories needed in the diet is determined by the size, rate of growth activity and individual energy needs of the infant. It is revealed that the calorie needs per pound of body weight is higher during the first year of life than any other time. It becomes vital for parents to understand that nutritionally inadequate and contaminated foods are the major causes of malnutrition in infants. Parents should educate themselves and gather infant nutrition information and keep track of what the infant is eating and in what quantities.