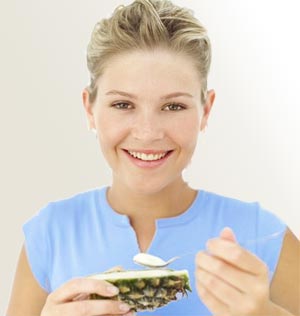 Understand the underlying principles of the Zone diet plan. Look up some simple recipes that can help you rustle a zone diet meal.

The zone diet plan can be best described as - carbohydrate moderate, protein adequate and low fat diet. This is also referred to as forty thirty thirty diet - 40% carbohydrate, 30% protein and 30% fat. Dr. Barry Sears developed the zone diet plan in 1995. It has seen many celebrity followers, Jennifer Aniston being one of them. Find out more on zone diet menus and simple recipes that can keep you within the zone.

Dr. Sears developed the Zone diet plan since he was genetically predisposed to heart disease. He identified eicosanoids - substances that affected the immune system and cardiovascular system and fat storage within the body. So, he aimed at developing a diet plan that enhanced the production of favorable eicosanoids. He is of the opinion that eicosanoids have an impact on the overall health of a person. According to Dr. Barry Sears, food has a powerful drug-like effect on the body.

The zone diet menu aims at maintaining optimum levels of important hormones, insulin in particular. Insulin swings are known to wreak negative effects on a person's moods, endurance levels and body fat levels. This can also result in major health problems. A zone diet plan seeks to rectify this imbalance by stabilizing hormone levels and thereby allowing the body to return to its natural balanced state.

High insulin levels are considered the harbinger of heart disease. Increased carbohydrate consumption is seen as the key reason for higher levels of obesity. The Zone diet plan works on the premise that fats are not the cause for obesity but the culprit is the increasing levels of insulin. Increasing instances of cardiovascular deaths have also been attributed partly to this factor.

A look at the Zone diet pyramid shows water at the base - indicative of the fact that one must drink a lot of water. Fruits and vegetables come in the next layer. Next in the zone diet plan pyramid are low-fat proteins and mono-saturated fats. The carbohydrates follow soon after. The Zone diet meal is protein adequate - it is not high as is the case with Atkins diet but sufficient to cater to the body's requirements. Exercise is vital to maintaining the Zone diet plan. A mix of aerobic and anaerobic exercise will complement the zone diet menu and you can see better results.

Celebrities such as Jennifer Aniston have seen wonders with the zone diet - her flawless skin and enviable figure. She claims that it is a healthy eating plan since it allows her to eat her favorite foods and yet can be sustained for long periods.

A person following the zone diet plan will notice a reduction in any edema due to increased urination as the body rids itself of excess sodium and water. After a week or so, weight loss is also noticed - at the rate of about a pound or pound and half per week. Other noticeable effects are improved ability to handle stress and improved mental focus.

The Soy Zone is a variation of the Zone diet where soy is used as a source of protein since it is known to yield superior hormonal responses and yield lower impact on insulin. It aids in maintaining insulin at optimum levels.

Listed below are a few recipes that confirm to the zone diet principles. You will be able to rustle up a zone diet meal with them.

Oat Bran Soufflé (A zone diet recipe for a dessert)

Mix all ingredients except jam. Put in small non-stick skillet and cook, covered, over low heat until set. Flip over and cook until done. You can top it with a dollop of jam when you serve.

Sauté sausage until cooked in non stick pan with minimal cooking spray. Add sliced onion and sliced peppers and stir fry for another 2 minutes. Whisk egg substitute with Italian seasoning and add to the pan. Cook until it firms up. Add cheese and diced tomatoes, transfer pan to broiler to finish cooking and melt cheese. Fold over and make omelet. Serve with chopped strawberries. This is a zone diet recipe that makes for a substantial breakfast.

Season the chicken with garlic powder, pepper, paprika, and salt. Sauté it in a non-stick pan and cut it into strips. Take a bowl and place chopped lettuce with oil, dressing and cheese. Toss well. Add chicken to lettuce and mix well. Place salad in a tortilla wrap and roll up. Secure with toothpicks and cut into desired sizes.