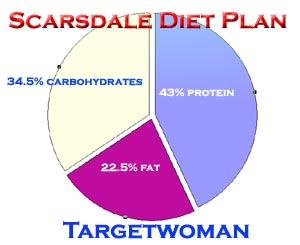 Created by Dr. Herman Tarnower, the Scarsdale Diet is a one - two week plan that consists of 43% protein, 22.5% fat, and 34.5% carbohydrates. Though the Scarsdale diet plan is known to yield quick results on weight loss, the weight loss is predominantly due to extremely reduced caloric consumption.

The Scarsdale diet plan is known to induce a weight loss of 10-20 pounds in a fortnight if followed rigidly. This is another fad diet that allows too few calories to sustain optimum health.

The Scarsdale diet plan has a rigid diet outline that has to be followed for 7-14 days. This is usually followed by another week or two of follow-up diet plan that is a slightly less rigorous. The Keep Trim program that follows the Scarsdale diet plan is a maintenance program but it too has a large number of restricted food items.

In a Scarsdale diet menu, there is no control on the portions. The good part is that salads and lean meats form a large chunk of the diet. But the diet is so severely restricted in calories that it is difficult to follow for too long. Besides, the protein content is also alarmingly high.

The Scarsdale diet plan involves abstinence from alcoholic beverages. But you can include diet sodas, regular or decaffeinated coffee and black tea. The Scarsdale diet menu only allows lemon and vinegar and mustard dressings. Non-stick vegetable spray, ketchup, chili sauce, Worcestershire sauce, soy sauce, mustard and catsup and herbs and seasoning are also allowed in a Scarsdale diet menu. All vegetables other than corn, peas, potatoes, lentils and any kind of beans are allowed.

A typical Scarsdale diet menu for breakfast consists of half a grapefruit, a slice of protein bread, and coffee or tea. Protein bread can be included during a lunch menu for a Scarsdale diet plan. Cold cuts can be eaten for lunch but you need to restrict yourself to certain meats. Dinner often involves animal protein or seafood.