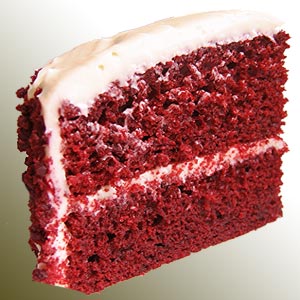 Though the origins of the red velvet cake can be traced to Southern cooking, this moist smooth delicacy still finds favor with cake lovers. We bring you easy velvet cake recipes that you can try out this festive season.

A traditional Southern specialty, velvet cake is dark red or reddish-brown in color. Hence, it also has the name, red velvet cake. The main ingredient of the cake is cocoa. Beetroot juice was initially used for the red color of the cake. However, today food colors or additional ingredients such as vinegar and buttermilk are used to turn the cocoa into a deeper red color.

The typical white frosting of the cake serves as a dramatic contrast to its actual color. Traditional cream cheese or butter cream frosting is generally used to achieve the white color.

There are few interesting stories on the origin of the velvet cake, though the exact history is still unknown.

During 1960s a woman, who was staying in Waldorf Astoria, New York has ordered for a cake. The cake that she had ordered was the red velvet cake, the signature desert of the hotel. Grappled by the taste, she wrote to the hotel asking for the baker's name and a copy of the recipe. The recipe arrived in the mail alongside a rather large bill. It is believed that the woman, who was annoyed by the bill amount, copied and shared the recipe to everyone she knew.

Another story is on the appearance of the cake in the feature film, Steel Magnolias released in 1989. The armadillo-shaped red velvet cake was served as a groom's cake for one of the film's main character. It is believed that the movie created a great resurgence amongst the southerners, recreating the recipe themselves.

Red velvet cake was a well-known dessert in the restaurants and bakeries of Canada during 1940s and 1950s. The cake was exclusively sold across Eaton's department store chain, which made many believe the cake to be the invention of the store's matriarch, Lady Eaton.

The red color is what has made the cake more alluring. American cookery specialist, James Beard's 1972 reference describes three red velvet cakes varying in the amounts of shortening and butter. Apart from red food coloring, many still feel that the reaction of acidic vinegar with buttermilk is what reveals the red color of the cake in the cocoa. This natural tinting may have been the source for the name - Red velvet cake.

During World War II, when foods were rationed, bakers used boiled beets to enhance the color of their cakes. Boiled grated beets or beet baby food are used even today in some red velvet cake recipes to retain the moisture.

Preheat the oven to 350 degrees. Grease a cake pan, line the bottom with baking paper. Mix cocoa powder and cake flour in a small bowl and keep it aside. Double the volume of egg yolks, vanilla extract, buttermilk and sugar by whisking them together. Ensure they are light. Add beet root juice and melted butter to the mixture and beat slowly.

Take another bowl to whisk salt and egg whites until stiff peaks are formed. Now, add the mixture to the batter and bake the same for about 20 minutes. Blend the cream cheese and mascarpone cheese in a hand mixture until smooth. Add vanilla, icing sugar and beet root juice to the mixture. Finally add whipped cream. Spread this frosting on the top and sides of the cake.

Run a simple check by inserting a toothpick in the center of the cake. The toothpick comes out clean once the cake is fully baked. Create the frosting by mixing milk, cream cheese, whipping cream and sugar. Beat the mixture in an electric mixture until light and fluffy. Spread the frost on top of the cake and store in refrigerator.

If you are planning to store your homemade red velvet cake, it is necessary that you keep it moist. This can easily be achieved with the help of cake keeper and waxed paper. Following are few tips that help you keep your red velvet cake moist and fresh.