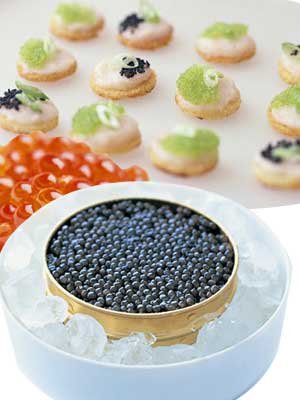 Beluga Caviar - a symbol of fine dining and gourmet food. Read more about the history of caviar and a Texas caviar recipe.

Talk of caviar and what comes to mind is visions of delicacy food that is associated with fine dining. Caviar, be it Beluga Caviar or Russian Caviar is generally indicative of a celebratory lunch or a romantic dinner or a luxurious celebrity party. Trace the history of caviar and look up the recipe for Texas caviar.

True caviar is the roe of any of the species of sturgeon or salmon. The roe or eggs are sieved to remove fatty tissue and membrane. It is then lightly salted with non-iodized salt. Purists believe that true caviar comes from the sturgeon alone. This saltwater anadromous fish is found in abundance in the Black and Caspian Seas as well as the Pacific Northwest and Southern Atlantic. The most prized caviar comes from the beluga, osetra, and sevruga varieties of sturgeon. But you can also find caviar from other fish such as the tuna, lumpfish and salmon.

Caviar must not be opened until needed. Remove the jars from the refrigerator about 10 - 15 minutes before serving. Refrigerate any leftover caviar but do not freeze it. It can toughen the caviar roe membrane and alter the flavor. Cover the caviar with plastic wrap before refrigerating. Caviar is served on bowls of ice. Metal is avoided since oxidation may lend a metallic taste to the caviar. Caviar roe must be handled with care, as it is tender and fragile. Ease it out of the box with a non-metal spoon. Caviar spoons are usually crafted from bone, tortoise shell and mother of pearl.

Caviar is served often as an hors d'oeuvre with canapes or toast points or bland, unsalted crackers. Many times caviar is accompanied by lemon wedges, sour cream, minced onion and hard boiled eggs. The finest caviar should taste neither fishy nor overly salty, with shiny, fine-grained egg globules. Team up caviar with dry champagne or frozen vodka.

Beluga caviar comes from one the rare varieties of the Sturgeon found in the Caspian Sea. The Beluga is also found in the Black, Azov, and Adriatic Seas, as well as the Dnepr and Danube rivers. Beluga caviar can weigh up to two thousand pounds. The eggs are large and light gray in color. It imparts a delicate buttery flavor. Since the southern part of the Caspian Sea is relatively free from environmental pollution, the Iranian Beluga caviar is much sought after. You can pick up a jar of pasteurized Beluga caviar that has a longer shelf life as compared to fresh caviar.

Look up this interesting recipe for Texas Caviar:

Cook the peas in boiling water till done but not too soft. Drain the water. Mix with the remaining ingredients in a large bowl and refrigerate for a day. Serve with tortilla chips.

Another recipe for Texas caviar:

Russian caviar from the Caspian Sea is a delicacy that finds favor with gourmet lovers of caviar the world over. True Russian caviar is always a premium, be it Beluga, Sevruga and Ossetra. It is served on a bowl with crushed ice.

Caviar comes from the Turkish work khavyar. The history of caviar can be traced to the Persians, who were the first to partake of the sturgeon delicacy. Called Chav-Jar or Cake of power, caviar was known to improve stamina and cure many an ailment. Iranian caviar is still considered an exquisite delicacy. Iranian caviar maintain its position on international market as the best kind of caviar.

Caviar was once reserved strictly for royalty. French caviar production was organized by Louis XVI's minister Jean Baptiste Colbert in the mid-18th century. Sturgeon has been part of the royal diet of England since the Middle Ages. In Russia, the history of caviar can be traced to the czars. The Russian nobility ate golden caviar - the small golden eggs of the sterlet sturgeon.

The history of caviar in the U.S can be traced to the turn of the last century when it was available at more affordable rates. Inns and taverns served caviar. The salty flavor encouraged thirst and enhanced beer sales. Much of the caviar then came from the Delaware River at Penns Grove, New Jersey. Over time there was a caviar boom and the U.S became the largest exporter of caviar.