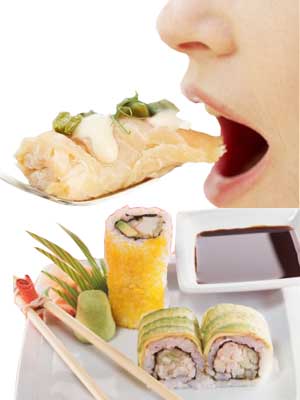 A guide to Japanese sushi, from sushi rolls and vegetarian sushi to tips on making them at home. A few sushi recipes are also included.

With its rich coastline that offers many seafood options and rich plankton, it is but natural that sushi should be the logical food. Japanese sushi is catching on in popularity the world over. These dishes use sushi rice that has been seasoned with sweet vinegar. Sashimi or raw fish and rice are the principal ingredients of sushi.

Look up information on sushi rolls and recipes to make vegetarian sushi. Our sushi calorie guide shows you how you can eat sushi and not let it show on your waistline. As they would say in Japanese Itadakimasu or Bon Appetit!

Japanese sushi dishes are those that use rice seasoned with sweet rice-wine vinegar. Raw fish, cooked fish, shellfish, avocado and many other vegetables are used in sushi dishes. Sushi began as a preservation technique for storing fish. The pressed rice sushi was slightly dried in the sun so the outside had a crunchy texture and the inside was soft and tasty.

This was done with salt and rice - and this led to the creation of sushi dishes that are gaining in popularity the world over. Sushi dishes such as Chirashii-zushi, maki-zushi and inari-zushi are seen at Japanese celebration meals.

Kaiten-zushi or sushi fast food is an inexpensive way to eat this traditional Japanese dish. Sushi plates are placed on a conveyor belt on a table or eating area. Sushi has invaded American mealtime tables in a big way.

With its low fat and health food appeal, it is little wonder that there are so many takers for Japanese sushi. While enjoying your sushi, do not dunk the pieces entirely into the sauce. The sauce is merely to add a touch of flavor. While sushi pieces in Japan are small, the American versions are larger.

Norimaki zushi: sushi rolls that come in a variety of fillings and thickness.

Gunkan: These are small cups made of sushi rice and dried seaweed. Fillings range from sea urchins to fish eggs and other seafood.

Inari: Simple sushi recipe that involves sushi rice filed into tofu bags that have been deep-fried.

Do not confuse raw fish with sushi. Sashimi is fresh and raw fish that is elegantly served chilled and sliced. Flatfish such as seabream, tuna, cuttlefish and abalone are ideal for sashimi. Brighten up a sashimi dish with parsley, lettuce and raw vegetables. It is served with soy sauce and ponzu. Wasabi, red pepper and green onions are accompaniments for a sashimi.

Here is a list of essentials that you would need before you start making sushi:

A recipe for sushi

Take short or medium grained rice and wash till the starch is cleared. Cook for about 15 minutes. Spread and allow to cool. Combine vinegar with sugar and salt to make a sauce. Mix with rice after it has cooled and stir it in. This sushi rice is then used in the sushi rolls along with the toppings of your choice.

A Japanese sushi meal is ideal for a light lunch or snack. Sushi dishes are low in fat and contain fewer calories. Typically a sushi dish contains 350 - 400 calories. While fish provides an excellent source of protein and omega 3 fatty acids, the seaweed is rich in iodine. Here is a list of the calorie content of various sushi dishes:

Sushi rolls (norimaki) are usually made of pieces of fish, crab or shrimp rolled with tempura pieces cooked to a crisp. Cucumbers and avocado also find their way into most sushi rolls. Rice sheets or seaweed are used for rolls. Seasonings for sushi are soy sauce and Wasabi (Japanese horseradish).

Pickled ginger or gari is served with sushi. It provides the refreshingly different taste between bites of sushi rolls. Finger roll sushi is called Nigiri zushi. Raw tuna rolls are called Tekkamaki while cucumber rolls are called Kappamaki. Inari zushi is brown and sweetish on account of the deep fried tofu.

1. Place a sheet of nori on the bamboo mat.
2. Moisten your hands and put a couple of tablespoons of sushi rice in the center and spread it evenly.
3. Spread a streak of wasabi in the middle and add layers of fish and vegetables.
4. Fold the bamboo mat to enclose the filling within the nori. Shape it and seal the roll tightly.
5. Cut the roll seam side down into rounds using a sharp knife.

You can combine any of these vegetables when you make sushi - cucumber, zucchini, green bell pepper, red bell pepper, carrots, daikon radish, asparagus, scallions, mushrooms, avocado and fresh spinach. Cook the rice sushi. Julienne the vegetable and steam them. Mix vinegar and brown sugar and mix with cooled rice. Follow the same recipe for sushi rolls using the vegetables. Smear wasabi paste over the rice layers.

Vegetarian sushi recipes make use of succulent fresh vegetables and tofu - rich in essential minerals and vitamins and low in fat. Making vegetarian sushi at home is not as difficult as you would imagine. You can whip up colorful sushi dishes - sweet brown rice contrasting well with the dark nori wraps and colorful vegetables.

Other vegetarian options for sushi are watercress, radish sprouts, bell pepper and mashed yams. Stuffed with spinach or avocado and carrot and sprinkled with sesame seeds, sushi recipes can be tried out at home for a delicious and healthy meal. Serve the sushi vegetarian rolls with dipping sauce, pickled ginger and green tea.

Rice sushi is not to be made with long grain rice but short grained sticky rice. Rice for sushi must not be cooked very soft. You need about one cup of cooked rice for each sushi roll. Rice sushi tastes best when made with Japonica -type medium-grained rice. Cool the rice for the sushi and add vinegar. Don't smash the rice grains when you mix the vinegar though. Sushi vinegar recipe - Combine 2 tbsp sugar, 1/3 cup white vinegar, 11/2 tsp salt and a dash of MSG. Bring all ingredients to a boil.