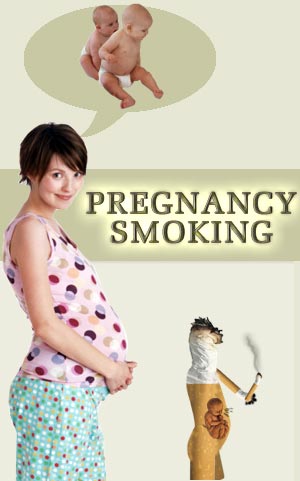 Smoking during pregnancy has health fallout, not just for the mother to be but also for the growing fetus. Smoking is believed to be responsible for 115,000 miscarriages a year and 5,600 stillbirths. Prenatal exposure to cigarette can lead to long-term physical and intellectual problems.

Every cigarette you smoke during your pregnancy is a risk for your growing fetus. Imagine passing on dangerous chemicals that tighten blood vessels and deprive the baby of essential food and oxygen. A mom-to-be that smokes a pack a day takes off nearly half a pound from the baby's birth weight. Smoking can adversely affect a woman's fertility.

Women who smoke are more likely to have problems conceiving. Smokers have lower fertility levels and children born to mothers who smoked have less chance of becoming a parent themselves. Smoking also reduces the chances of IVF succeeding. Smoking adversely affects the hormone production and the transportation of the egg through the fallopian tubes. Men who smoke tend to have a lower sperm count with lower motility.

Effects of smoking during pregnancy

Risk of smoking during pregnancy

This can happen due to slow fetal growth. . A smaller baby is more likely to become stressed during birth. Smoking during pregnancy reduces the food and oxygen that passes from the placenta to the fetus. The nicotine in cigarettes may cause constrictions in the blood vessels of the umbilical cord and uterus, thereby decreasing the amount of oxygen available to the fetus.

Nicotine also may reduce the amount of blood in the fetal cardiovascular system. A baby of a woman who smokes weighs on average 170 to 200 grams lighter. The more a woman smokes the greater the weight reduction. Undersized babies also have underdeveloped bodies, lungs that may not be strong enough to work on their own, impaired brain development and possible future addiction for the child too.

Risks of smoking during pregnancy can include likelihood of birth defects such as cleft lip or chronic disabilities such as cerebral palsy and mental retardation. There are chances of other problems in later years such as respiratory illnesses (asthma, ear infections, tonsillitis), behavioral problems and learning disabilities. Babies exposed to cigarette smoke are at increased risk from SIDS - Sudden Infant Death Syndrome.

The risk of smoking during and after pregnancy is more so for nursing mothers who might pass harmful chemicals to the baby. The milk supply may be reduced too. Take this perfect opportunity to quit smoking, its good for you and good for your baby! You will find yourself with improved health and energy levels - to see you and your baby to a healthy birth.

Top of the Page: Smoking during Pregnancy
Popularity Index: 100,280