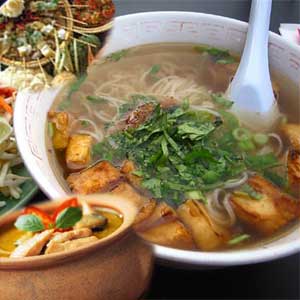 Thai food is internationally renowned for its taste and wide range of choices. With a blend of various Asian cuisines and its own nativity, Thai food has become a universal choice for food lovers who love to enrich their taste buds.

As the well-known axiom goes 'one's culture can be seen through a window of one's kitchen'. Thai cuisine is clearly an inseparable part of Thai culture and mirrors the traditions of the land. The 'Tai' people migrated from valley settlements in the mountainous region of Southwest China between the sixth and thirteenth centuries, into what is now known as Thailand.

Influenced by Chinese cooking techniques, Thai cuisine flourished with the rich diversity of the Thai peninsula. The first rulers of Thailand appreciated the value of differing cultures and brought scholars and artisans from China and India to teach the Thai people. It isn't difficult to classify Thai food as a hybrid between Chinese and Indian fare. The peppers and curries usually associated with Indian entrées is ever-present in the Chinese style noodles and rice dishes of Thai food.

Originally, Thai cooking reflected the characteristics of a waterborne lifestyle. Aquatic animals, plant and herbs were major ingredients. With their Buddhist background, Thais shunned the use of large animals in big chunks. Big cuts of meat were shredded and blended with herbs and spices.

Traditional Thai cooking methods were stewing and baking, or grilling. Chinese influences saw the introduction of frying, stir-frying and deep-frying. Culinary influences from the 17th century onwards included Portuguese, Dutch, French and Japanese techniques. Portuguese missionaries, who had acquired a taste for chillies while serving in South America, introduced it into the Thai cuisine during the late 1600s.

In a country where more than 70% of the population are farmers, there is a natural inclination for the Thai people to treasure their cuisine. Eating is not just something done for nourishment or hunger but it's a symbol of their way of life. The Thai people greet each other during the early evening with the salutation, 'Gin kao', which means, 'have dinner with us'.

Thai cuisine is famous all over the world and is essentially a marriage of old Eastern and Western influences. harmoniously combined into something uniquely Thai. Modern day Thai cuisine, like many of its Asian counterparts is a 'throw-together' style of cooking that allows much room for creativity. A typical Thai meal should consist of soup, a curry dish with condiments, a dip with accompanying fish and vegetables. A spiced salad may replace the curry dish. The soup can also be spicy, but the curry should be replaced by a non-spiced item. There must be harmony of tastes and textures within individual dishes and the entire meal.

An example of the tremendous variations in ingredients used in Thai dishes exhibiting the creativity and diversity of the Thai cuisine is the green papaya salad (som dtam). There are dozens of ways to make this favorite food of the Thai people. Some prefer to use tamarind along with lime juice, while others like it sharply sour with lime juice only.

The north easterns like it pungent with the flavor of fermented fish and some prefer it with fermented shrimp paste, while still others prefer it to be clean tasting without either. Some like it sweet with palm sugar, sprinkled with roasted peanuts, while others care for neither sweet nor peanuts and go for it in a hot and salty style with the flavor of salted crab. The permutations and combinations are plenty. Little wonder why we need to specify our preferences when ordering green papaya salad.

A typical Thai menu starts with soups - Tom Kah (coconut milk soup) or Tom Yum (Hot and Sour soup). Other popular dishes that find themselves on the Thai menu are Squid with rice noodles, Sticky rice with prawns or chicken, Tom Yam Gung and Green chicken curry. The all-time favorite on a Thai menu is pad Thai or Stir-fried Thai noodles.

This is a refreshing salad, normally relished by kids. The Salad is a lovely combination of flavors and well worth the draining time for the cucumbers. The recipe is simple and will not take more than 30 minutes to prepare

Finely chop the cucumbers. Leave them to drain in a sieve for half an hour. Squeeze the drained cucumber to remove excess moisture and dry between paper towels. Sauté onions and peanuts in oil for 2-3 minutes. Mix vinegar, juice, zest, fish sauce and sugar. Stir to dissolve. Now mix all the ingredients together. Extra fish sauce or palm sugar may be added if desired. Serve chilled

Palm or coconut sugar to taste

Soften the noodles by soaking in cool or lukewarm water till they are limp but firm to touch. Mix fish sauce with palm sugar and tamarind juice. Heat a wok over high heat and stir-fry the shrimps in little oil until they turn pink. Sprinkle fish sauce over them. Add noodles and other ingredients in the wok and stir-fry for about 1-2 minutes till they change texture. Keep aside. Heat some oil in the wok and crack eggs in it and toss it with the noodles once it is cooked into chunks. Add seasoning mixture to evenly coat the noodles. Toss bean sprouts, chopped peanuts and serve with the noodles. Garnish with cilantro, green onions, lime wedges and chopped peanuts.