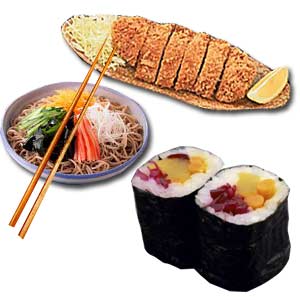 A guide to Japanese food and its various components be it nabe or tofu, tempura or sake. Look up simple recipes for Japanese food.

fish, clams and fish cakes are used in most Japanese food recipes. Probably this accounts for the higher life expectancy among the Japanese people. A Japanese meal usually ends with green tea. There are regional variations even in a small country like Japan. While the Japanese food recipes from the Kanto region have a stronger taste, the recipes from the Kansai region are lightly seasoned.

While typically Japanese meals are eaten with chopsticks, forks, knives and spoons are also used. A Japanese meal setting includes a bowl of steamed rice on your left and miso soup on your right. Nabe dishes are prepared hot at the table and include ingredients such as negi (Japanese leek), hakusai (Chinese cabbage), mushrooms, seafood and meat. Sukiyaki, Oden, Chanko Nabe and Shabu-Shabu are popular nabe dishes. Tsukemono or Japanese pickles are served with most Japanese meals.

Edamame or young soybean boiled and seasoned with salt is a popular Japanese snack. Ohitashi or boiled greens can be eaten with soy sauce. Alternatively you can coat vegetables with sesame paste. This Japanese dish is called goma ae. Tempura dishes are seafood, vegetables and mushrooms coated with batter and deep-fried.

Rice forms a core element in most Japanese meals. In fact, it is eaten for lunch and dinner as well as breakfast. Rice used in Japanese cuisine is sticky and short grained. While white rice is served at Japanese meals with a variety of toppings, there are other combinations such as Domburi, Kare Raisu (Curry Rice), Chahan (Fried Rice), Kayu (Rice gruel) or Onigiri (Rice balls with vegetables or seafood in the middle). In fact rice balls wrapped in seaweed are a popular snack and available easily. Kare Raisu is also a popular take away dish. Rice cakes (mochi) are another popular Japanese food item.

Japanese noodle dishes are made with soba noodles (buckwheat and wheat flour) or udon noodles (wheat flour). Somen noodles are relatively thinner and eaten cold while yakisoba noodles are served fried with vegetables and meat. Seafood is eaten grilled, steamed, boiled or even raw as in Sashimi.

Pungent sauces and delicate flavors are used to whip up dishes that tantalize the taste buds and look appetizing too. Japanese food recipes primarily make use of seasonings such as shoyu (soybean sauce), mirin (sweet sake), vinegar, myoga (ginger) and wasabi (Japanese horseradish). Ground sansho seeds and yuzu also find place in Japanese food recipes. Miso paste is made with soybean and used to marinate fish and flavor soups. Fermented soybeans or Natto are usualy served with chopped onions and mixed with rice. Its characteristic pungent smell and stringy texture needs some getting used to.

Sake or Japanese rice wine is made with brewed rice, water and malt. This Japanese wine complements the cuisine. Other Japanese beverages include ume – an alcoholic beverage made with Japanese plums and shochu – a distilled spirit made with sweet potatoes, rice and sugar cane. Typical Japanese sweets are made with rice, sugar and red azuki beans. Yokan, higashi and manju are served as desserts. Chawanmushi is steamed egg custard.

Mix ½ cup soy sauce, ½ cup mirin and 2 tbsp sugar. Simmer in a pan for a few minutes and cool. Store for use later.

You can prepare this thick sweet omelet for a meal. Serve it with rice or fish.

Mix sugar, dashi, shoyu and sake and salt. Simmer on low flame. Cool and add beaten eggs. Pour a ladle full of mixture on a heated frying pan. Spread it evenly. Use oil as required. Cook both sides till done. Serve chilled. This omelet is usually made on a square pan.

This recipe with deep fried tofu pieces can be served on a bed of rice. Deep fry tofu triangles in a wok till golden brown. Dip in hot water and squeeze out at once. Use shoyu and serve with rice and noodles.