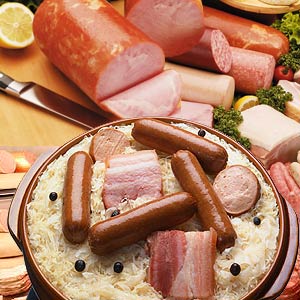 Pork is the most liked and largely eaten meat in Germany. Sausages of different types, approximately 1500 types, are prepared with pork. E.g. Wienerwurst - beef and pork flavored with garlic and coriander considered to be the origin of the American frankfurter. Cooked or smoked hams are a specialty in Germany. Black Forest Ham has no bones and comes from the back. Blood and liver sausages are eaten cold on bread.

Bread is another staple and popular food, with about 300 varieties baked dark brown in color and enriched with protein. There is a museum dedicated to bread making and its history in Ulm, a city in Germany. The famous black forest cake finds its origin in Germany. Other German cakes that are popular around the world are Stollen and Lebkuchen. Also famous are brandy soaked raisin cookies, pflaumenkuchen (plum, coffee and almonds), candied sweet potatoes and a whole range of ice creams.

The food in Germany bears a major regional influence and is also influenced by the neighboring countries Switzerland, Belgium and France. There are food items in Germany named after the local regions, e.g. Black Forest ham, Westphalian ham, Nurnberger Lebkuchen, Black Forest torte etc. Among the local regional cuisine spatzle - a type of pasta from the Southwest region, knodel - dumplings from Bavaria, and labskaus - a dish with boiled potatoes, pickles and corned beef from the North of Germany are famous.

A classic German meal comprises several courses. A meal comprises of soup (Suppe), a main course (Hauptspeise) accompanied by a couple of either cooked or uncooked dishes. Nachspeise is all about foodstuff that is served after a meal. Germans love to have a drink along with their meal, be it beer, wine or champagne type sparkling drink called sekt. German wines are sweeter and fruitier than those coming from other nations.

Prominent among German wines is Riesling. Other favorites are Silvaner and Pinot Noir. For lovers of beer, Germany does not disappoint. From the world-famous Oktoberfest beer festival to the different varieties brewed in the country, beer is a popular drink. While the beers from Munich are light, the others are stronger and bitter. Other spirits such as Schnaps and Obstwasser are popular beverages in Germany. Germans are also well-known for their freshly brewed coffee.

Traditionally nearly 5 meals were consumed a day. A traditional German breakfast - Fruhstuck comprised breads or rolls and a choice of jams, honey, cold meats, cheese along with fruits, boiled egg, yogurt, cream cheese (quark), cornflakes accompanied with plenty of tea and coffee. The main meal - Mittagessen comprised many courses. An appetizer i.e. soup, main course of potatoes, meat, vegetables, side dishes (beilagen), finished with a sweet course - Nachspeisen. Dinner - Abendbrod is an affair of cold food generally eaten between 5 and 6 in the evening.

Traditional German food includes meat mostly pork, varieties of bread and numerous sweet dishes in different sizes and shapes. Excessive meat production paved the way to making delicious sausages in Germany. Traditional sausages are made in different varieties such as knackwurst, weisswurst, bratwurst etc. These sausages are easily available at all kiosk stands and are not an expensive fare. Potatoes are likewise served boiled, mashed, fried or in baked forms.

The most traditional among them are kartoffelpuffer - fried potato pancake, bratkartolffen - fried potatoes with onion and bacon.

There are seasonal and traditional varieties of food served during a particular season in a particular region alone such as spargel - asparagus, which is served along with Hollandaise sauce or butter and or with pork and ham. Traditional dishes made from meat are famous in Germany, e.g. eisbein - pig knuckles served with potato and sauerkraut, spannferkel - spit roasted baby pig.

Listed below are a few traditional German recipes that are prepared at homes across Germany.


In a salad bowl, mix sliced knackwurst sausage and sliced onion. In one more small bowl beat pepper, salt, vinegar and oil. Spread the dressing over the knackwurst and serve with toss. Serve with rye bread


Preheat oven for grilling/broiling sausages. Alternately sausages can be sautéed or barbecued too. In a large saucepan pour tomato sauce and mix all the ingredients other than the curry powder and the sausage. Cook over medium heat for 30 minutes after bringing to a boil. Grill the sausage for 3-4 minutes on both sides till cooked well, slice into ½ inch pieces. Spread the tomato sauce mixture on the sausage, add paprika and curry powder. Serve with rolls and French fries.