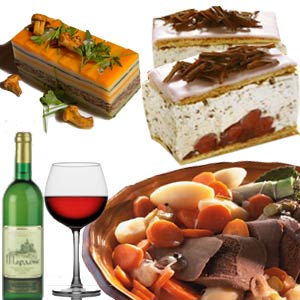 French people have great passion for good food in all its varied forms. France is famous for its wide ranges of cheeses and wines. French cuisine uses French wine and French cheese as they are an integral part of this cuisine and they are used as accompaniments as well as ingredients. Ranging from the conventional baguette or the cheese or the wine, French meals can be simple or elaborate affairs comprising different courses. The amazing range of different climates and geographies support France's local production of many ingredients that are necessary for their cuisine.

French cuisine has distinctive features in every region of France and is also known for its diversity and style. Many of the dishes are prepared using olive oil, herbs and tomatoes in the French Mediterranean cuisine, while in the northwest France cuisine use of butter, soured cream (Crème fraiche) and apples will be more. The northeast France like Alsace or Lorraine includes beer and sauerkraut in their cuisine which may be regarded as a German influence. Use of more vegetables and fruits is noticed throughout the south of France because of the favorable climate. Seafood is a favorite with people near the Atlantic coast and the Mediterranean. Those who live in the inland areas near Loire valley use freshwater fish.

Some of popular dishes like Foie Gras and Coq au Vin are famous throughout France. Other regional specialties enjoy their popularity too. The reason for this is the availability of quality ingredients and a superior preparation in the respective regions. The choice of ingredients and the style of cooking make it unique. It is little wonder that each region of France can boast of its local specialties. The traditionally elaborate haute cuisine is more popular outside France and is a costly proposition. Mostly influenced by the regional cuisine of northern France and Lyon, it has a significant touch of refinement.

In terms of ingredients and preparation there are regional influences which are distinctive. French cooking styles also follow three general approaches which vie with each other.

Cuisine bourgeois which is the classical French cuisine typically includes dishes that use cream-based sauces and hence the food is rich and filling.

The most sophisticated and extremely classical French cuisine known as haute cuisine offers elegant and elaborate food. The expensive meals use the finest ingredients and tend to be heavy, particularly because of the use of cream in most of the dishes. Presentation is given a strong emphasis; there is precision and uniformity in even cutting the vegetables.

As a reaction to the classical school of cooking, Cuisine Nouvelle was developed in the 1970s. This simpler and lighter food is less rich avoiding heavy cream sauces of the classical style and the portions tend to be smaller. With more emphasis laid on local and seasonal ingredients, cooking is quicker and not so elaborate.

Regional specialties are focused in Cuisine de terroir which is more rustic in nature. The main focus in this cooking style is on local produce and food traditions.

Besides cooking, cheese is served as a separate course in French style of food. Normally, after the main meal, cheese is served before dessert. The cheese platter typically consists of three or four different varieties of cheeses. It is left for the guest to choose the cheese of their preference and these cheese slices can be taken along with slices of baguette or bread.

The French love their food and this can be gleaned from time-honored family gatherings around the home dinner table, especially on Sundays and other holidays. They prepare their feasts lovingly over many hours and consume the same leisurely. These feasts include many appetizers and main courses followed by a number of wines. A typical French lunch or dinner consists of:

Wash and remove excess water from the salad leaves and separate them as individual leaves. Prepare individual salad portions. Boil the eggs for about 8 minutes, peel and cut into four pieces. Place the eggs over the salad leaves. Cut the cherry tomatoes into two halves or the ordinary tomatoes into four and place them on top of the leaves even before the eggs are placed. In little oil, fry the chicken livers and place them on the salad. In a non-stick pan, fry the bacon pieces on medium heat without oil till the bacons are crispy. Spread the cooked bacon bits over the salad discarding the fat. Add desired salad dressing.

Preheat the oven at 200 degree C or 400 degree F. Peel the pears, leaving the stalks on. Brush each pear with lemon juice. In an oven-proof dish, place the pears. In 150 ml water dissolve the sugar and bring it to boil without stirring. Boil the mixture until the syrup turns a light golden caramel. Removing from heat, quickly pour on the remaining water, and stir over a mild heat until the caramel gets dissolved. Pour this caramel over the pears.

Cover with a lid or aluminum foil and cook for 30-40 minutes in a pre-heated oven till the pears are soft and translucent. You can turn the pears in the syrup occasionally while cooking. Lift out the pears carefully and make them stand upright in a serving dish. Put the syrup in a saucepan and boil until it thickens. Add small butter pieces. Pour over the pears and allow it to cool. You can serve the pears with ice cream or lightly whipped cream.