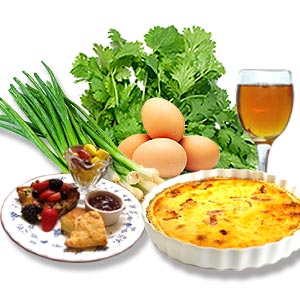 Quiches are highly adaptable as you can try variants for the fillings. Look up some simple quiche recipes, easy to cook and tasty to eat.

Quiche is a classic French dish consisting of a pastry crust filled with savory custard, made from egg, cream and other ingredients of choice. A typical quiche is an open pie (top is not covered with pastry) which is succulent inside and crisp outside. The pastry crust is normally blind baked prior to stuffing the custard.

You can put your culinary skills to the test and try many variations to the egg and cream custard as you want. You can add cheese, vegetables, bacon and seasoning or anything that is readily available and interests you. Quiche may be eaten for breakfast, lunch, or dinner or even added to your party menu.

The history of quiche

The origins of many of our favorite dishes have fascinating tales behind them. Though quiche is popularly known as a French dish, it originally hails from Germany. This dish originated in Alsace-Lorraine and now is part of northeastern France.

For a long period this place was under German control and was known by the name Lothringen. Hence it was christened as Quiche Lorraine by French. The word 'Quiche' is from the German word 'Kuchen', meaning cake. After World War II, quiche became popular in England and later in the U.S. too.

Quiche has undergone many transformations over a period of time. Earlier custard contained egg and cream with smoked bacon or pork pieces. But now cheese has become an important ingredient of the custard and the bottom crust which was originally made from bread dough has been replaced by short-crust or puff pastry.

Once you have a pastry crust ready, making a quiche is an easy task. You can pick up ready frozen crusts easily in super markets. If you do not mind the extra work, fresh crusts are surely worth the effort as quiches taste wonderful with fresh crusts. Here is the recipe of a pastry crust

Mix flour and salt together in a large bowl. Then, add butter and rub it into flour until it forms into crumbs. Sprinkle cold water over the flour mixture, little at a time, stirring gently. Add just enough water to make the firm dough.

Wrap the dough in a plastic wrap, and refrigerate it for about 20 minutes. Roll out the dough into thin circles of equal sizes

Preheat the oven to 190C/375F. Insert the circle in pie pan and prick holes over the bottom of the pastry using a fork. Bake for 10 minutes and the crust is ready for use

Quick tip: After baking, paint the bottom of the crust with egg white using a pastry brush. This will seal the crust and make it crisper too.

In a mixing bowl, whisk together the milk, eggs, nutmeg, salt, and pepper. Blanch the spinach until tender and sauté the onions lightly. Start layering the spinach, onions, and cheese respectively in the baked crust. Pour the egg mixture on them and bake in 375°F oven for 40 minutes.

You can even mix the ingredients instead of layering to achieve mixed texture. At the end insert the knife in the custard. If it comes out clean and non-sticky, your quiche is almost done. Allow it to cool down a bit and it is ready to be served.

Prepare the egg mixture by combining the beaten eggs with salt, pepper, cream and oregano. Mix all the other ingredients and evenly place in the greased pie pan. Pour the egg mixture over them and bake at 350 degrees for 40-45 minutes, or until a knife inserted into the custard comes out clean.

1 cup of cooked and chopped bacon

Take a mixing bowl and beat the eggs lightly and mix in the cream and the milk. Mix cheese, bacon, onion and parsley and pour into the pie shell. Bake at 350 F for 40-45 minutes.

Salt and pepper according to the taste

Take a bowl and whisk together mayonnaise, milk (or milk with fresh cream), Salt, pepper and eggs in it. Now stir the onions, cheese and crab meat in the mixture. Now spread this mixture into the pie shell. Bake for about 40 to 45 minutes at 350F in the oven. You can even add one cup of sliced leeks to the crab quiche to enhance the taste and texture.

Sauté the shallots and salmon in butter until tender. Spread them in at the bottom of the crust pie and generously sprinkle grated cheese on the layer. In a mixing bowl whisk the eggs, cream, salt, pepper, and nutmeg together until combined. Pour the mixture on other ingredients and place the quiche in the oven to bake for 40 minutes at 375° F.

Quick tip: Whenever you are layering the quiche heaviest items like vegetables, meat should be laid first then the lighter items like cheese can be added. Always pour the egg mixture at the end. Also remember to slightly cook the vegetables or the meat before adding to quiche.