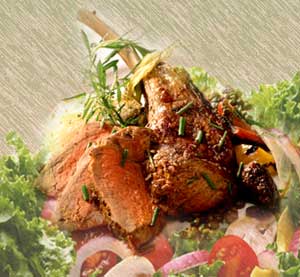 Greek food, an undeniable fusion of culture and taste evolved over the centuries. From the Moussaka to the Dolmas and Baklava, Greek food is a smorgasbord of delicacies.

Greek cuisine offers an unbelievable fusion of culinary expertise. From the times of Alexander the Great to King Constantine and the Turkish invasion, Greek food has been influenced by many other culinary traditions. Consequently, the current day cuisine shares many names in common with other cultures - the Moussaka and Baklava are Turkish names whereas dishes like the Pastitsada have a strong Italian flavor. Read on to find out more about the role of olives in Greek cuisine and savor some of the better-known delicacies.

The climate of Greece is conducive for growing olives and lemon trees and both of them form an important part of Greek cooking. Vegetables like aubergines and courgettes are commonly used. Garlic, thyme, basil, oregano also find pride of place in Greek food. Honey is used as flavor for desserts and the famous Feta cheese is usually a specialty ingredient.

Religious festivals and seasons play no small role in influencing the food of a land. Easter is perhaps the most important festival in Greece. The Easter sweets are made from the fresh creamy cheese that is available at that time. Tiny succulent spit-roasted lamb or kid and salads of wild greens, tiny raw artichokes and fresh fava beans are the traditional dishes.

Lamb that is the principal meat served during festival seasons is usually spit roasted. Regular lamb dishes are usually braised and stewed in casseroles with assorted vegetables and skewered and broiled. Pork, beef and game are marinated, grilled and baked. Chicken is broiled or braised. Good meat and vegetable combinations make for a complete meal and are often embellished with the golden lemon sauce or cinnamon-spiced tomato sauce.

A typical Greek meal would begin with a simple salad containing Feta Cheese, Kalamata olives and tomatoes with a sprinkling of olive oil. Tzatziki is a classic starter, which includes a yogurt dip blended with cucumbers, crushed garlic and vinegar garnished with almonds and other nuts. It is normally eaten with Pita Bread. Taramasalata is another dip made with fish roe, bread crumbs, onion, olive oil and lemons and can be eaten with Pita Bread. Dolmas are stuffed Grape Leaves filled with rice, raisins, fennel seeds, mint, onions, parsley and sometimes ground lamb.

Be it the starter or the main course, there are specific wines that go with every dish. Robolla, a white wine from Cephalonia, usually accompanies the Tzatziki. Taramasalata is usually eaten with a Dry Muscat from Samos. Xinomavro, a red wine from Macedonia is the classic accompaniment to the Dolmas.

Moussaka is the quintessential Greek main course. Moussaka is a bake, made with ground lamb, eggplant, olive oil, onions, ripe tomatoes, white wine and grated Kefalotiri cheese. The whole bake is covered in breadcrumbs and béchamel sauce before it is baked. Styphado is a traditional Veal Stew, slow cooked with onions, garlic, tomatoes and olive oil, with a little red wine. Greek style stuffed squid is a delicacy, made with extra large squid. The squid is filled with Halloumi cheese, breadcrumbs, onions, parsley, garlic pine nuts, rosemary and olive oil. It is baked after being doused with white wine.

The Greek national dish is perhaps the Souvlaki It is a blend of lamb or beef and seasonings, seared and stuffed in a pita topped with sliced and diced tomatoes, onions and tzatziki, then served with a yogurt sauce. Moussaka is normally eaten along with a red wine like Agiorghitiko while Styphado is eaten with a heavy red wine such as a dry Mavrodaphne.

Undoubtedly Baklava is the most famous Greek desert - multi-layered pastry filled with crunchy nuts and oozing with honey syrup. It is made up of little Filo squares filled with a walnut, semolina and honey mixture and garnished with honey and grated orange peel. Cookies are accompanied by thick Greek coffee. Koulouria or Koulourakia are breaded butter cookies with a light sugar glaze. Kourabiedes are sugar covered crescent shaped cakes that are served at weddings, at Christmas and on special occasions. Diples are honey rolls thin and flaky that crumble when bitten. Kataifi is a delicious pastry made of shredded phyllo rolled with nuts and honey and sprinkled with syrup.

The Greeks revere the olive tree. Normally cooking is done with olive oil that is obtained by mixing refined and virgin olive oil and an acidity of over 1.5%. Drizzling or seasoning is done with 'extra virgin', which has an extremely fine taste and acidity of not more than 1%. Olive oil is known for its therapeutic properties to combat high cholesterol, poor metabolism, obesity and breast cancer. It is useful in combating liver problems and is a natural remedy for constipation and gall bladder ailments. Recent research has proved that olive oil inhibits the formation of gallstones.

almonds
breadcrumbs
sugar
cinnamon
cloves
filo dough
melted butter
Make a syrup of sugar, water and lemon juice. Drop almonds in hot water and remove. Peel them and grind them fine. Add sugar, cinnamon, cloves and breadcrumbs. Lay filo dough sheets in a baking dish. Sprinkle almond mixture on it. Layer it with 2 more sheets of filo dough alternated with almond mixture. Brush melted butter in between layers. Bake for about 90 minutes. Pour the sugar syrup over the cooled Baklava.