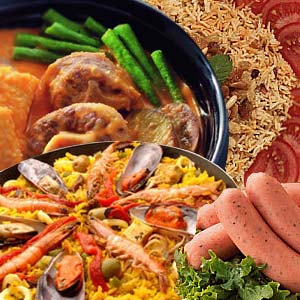 Sour and salty flavors dominate Filipino cooking. It has the tang of the Chinese, Spanish, Mexican, American, Malay and Indian flavors.

Filipino cuisine or Philippines cuisine has the tang of the Chinese, Spanish, Mexican, American, Malay and Indian flavors. The food consumed and prepared by the people of Philippines is as varied as the diverse traditional factions that constitute the Filipino people. Filipinos consume three major meals a day - 'almusal'- breakfast, 'tanghalian' - lunch, and 'hapunan'- dinner and a light snack 'merienda' in the afternoon.

Freshly cultivated fruits and vegetables form the main ingredients of any meal along with meat, fish and poultry, rice (kanin). The food is seasoned by the rich selection of special herbs and spices that are collected from all over the island. Filipinos eat their food using fork, spoon and knife, food is eaten using the hands when dry dishes are served.

Breakfast or almusal: Filipinos have a customary method of serving and preparing dishes for breakfast. The dishes are served in various ways that typically include:

Dinner or hapunan Stir-fried vegetables along with dishes that are served for lunch along with achara or pickles and desert constitute dinner.

Early settlers or civilization of the Philippines cooked their food by either roasting, steaming or boiling. Later food preparation methods of the Filipinos were influenced by the Malay style of cooking in the Pre-Hispanic era and thus food was cooked by boiling, roasting or steaming. Meat included pork, fowl, dog, fish etc. Business with China and other parts of Asia brought in food influenced from these parts of the world too, famous among them being fish sauce (patis) and soy sauce (toyo), aromatic soups and stir frying methods. Few of the popular methods of cooking include:

Of the cooking methods listed above nilaga, inihaw, roasting and guisado, are very famous. Current healthy cooking methods have been an integral part of the Filipinos cooking.

Sour and salty flavors dominate Filipino cooking. Filipino food is characterized by a dish called sinigang - fish slightly boiled in sour stock of vegetables and fish sauce. Fish is the favorite seafood when compared to shrimp etc. Fish is best liked by Filipinos when it is raw and enjoyed most when it is in the form of kilawin (vinaigrette), inihaw (grilled) or just stuffed with onions and enclosed in a banana leaf.

Food in Philippines is not very spicy and is usually bland and mild, chilies are kept at bay. Thus for people with sensitive taste buds Filipino cuisine is the best. Sour flavor is derived from cooking in vinegar, tamarind, mango, guava and kalamansi (cross between lime and orange).

Scale the fish and remove the intestines. Using a sharp knife make an open cavity below the head and remove the meat of the fish through this. Remove the spine of the fish by cracking off the bones at the head and the tail base. Remove all the meat from the skin. Marinate the skin and the head in lemon juice, soy sauce and pepper. Boil the fish meat in water added with salt for 5 minutes.

Sauté onions and garlic till brown and add carrot and tomatoes and cook till they are tender. Add cooked peas, chopped ham, raisins, and the milk fish meat to the mixture and cook for another 5 minutes and add salt and pepper as per requirement. Add a beaten egg along with the rest of the mixture. Stuff this mixture in the head and the skin of the milk fish and sew ends if required. Deep fry in oil till it becomes brown in color. Slice and serve hot.


Boil oxtail in water for 11/2 and 2 hours. Roast rice until golden brown and process in food processor. Heat oil in a wok or large and sauté garlic and onion. Add banana blossom and 1 cup of achiote seed water. Later add aubergine, string beans and Chinese spinach. Blend in peanut butter and rice and add the tenderized oxtail. Add some more water and boil till it simmers. Season with shrimp paste and bagoong and serve