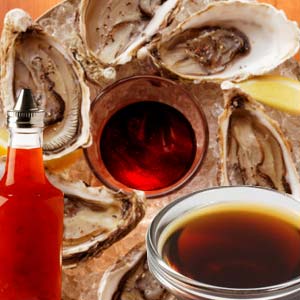 Check out typical sauces that find place in most Southeast Asian cuisine. Read up more on Teriyaki sauce, Hoisin sauce and soy sauce.

Hot, fiery, pungent and aromatic - sauces are intrinsic to most dishes of Southeast Asia. Sauces can often bring out the best from the ingredients or make a delectable treat out of any common food when added in the right quantities. A few drops of soy sauce or hot and sour sauce can make all the difference. Check out how teriyaki sauce is used for basting meats. Read up more on Hoisin sauce, a popular flavoring agent.

Teriyaki is a type of Japanese cooking that involves basting or marinating with teriyaki sauce and roasting or grilling the meats. This teriyaki sauce adds luster to the food. Teriyaki sauce is a blend of soy sauce, sugar, mirin and sake. Mirin is made with rice yeast and Japanese liquor. You can add some zing with ginger, green onions or sesame. Teriyaki sauce is thickened and reduced to desired consistency for meat or fish dishes. Teriyaki sauce can be bought off the shelves and used to marinate meat or vegetables.

Mix ingredients and heat over low heat. Stir till sugar is dissolved. You can cool this teriyaki sauce and refrigerate it for use later. Use this sauce to baste meat and add fresh coriander, ginger slices and black pepper. Toasted sesame can be added for extra crunch.

Hoisin sauce is popularly used as a flavoring agent at the table. Its characteristic reddish brown color adds zest and flavor to Chinese cooking. Hoisin sauce is typically made with soy, garlic, vinegar, spices and red chili peppers. This thick sauce with its distinctive sweet and spicy flavor is used for glazing grilled meat, as a dipping sauce or as a marinade.

It is often called Chinese barbecue sauce and is intrinsic to the recipe for Peking Duck,roasted pork and even in spring rolls. Hoisin sauce can be used to thicken and flavor a dish. This sauce is equally popular in Vietnam as tuong den which means black sauce. Traditionally, this is used as a condiment, dipping sauce and a flavoring agent.

Fish sauce is an essential ingredient in many a Southeast Asian dish. Fish sauce is often a dipping sauce for shrimp, chicken or pork. Fish sauce is referred to as nuoc mam in Vietnam, nam pla in Thailand and teuk trei in Cambodia. Nuoc Mam means the water of salted fish in Vietnamese language. Typically fish sauce is made with anchovies while some varieties of fish sauce are enhanced with herbs and spices.

The Chinese typically use Soy Sauce while the rest of the South East Asians use Fish sauce to flavor the recipes. Fish sauce typically has about 50 % sodium content and the quantity added to any recipe should factor in this sodium level. Generally nuoc mam is associated with a strong fishy smell which undergoes a transformation when mixed with other ingredients.

Fish sauce is much like olive oil, coming in different draining options. The best and clearest fish sauce is used for table settings and dipping. The other varieties are used for cooking. Fish sauce is not used directly as a dipping sauce but is blended with other sauces for a tantalizing aroma.

Another favorite stir fry sauce for the Chinese recipes is Black bean sauce which is made of fermented black beans and thickened with caramel and wheat flour to add body. This sauce imparts a sweet,savory and smoky flavor to noodles and stir fries. The Chinese way of cooking reigns as one of the most delicious cuisine of the World for its simple but effective ways.

Soy sauce is a common enough seasoning that is used the world over. Though it was popularized by its use in Chinese dishes, soy sauce is a popular accompaniment for stews and salads. With its rich nutritive content, soy products are constantly sought after. Soy sauce is made with soybeans, water, salt and roasted grains.

This sauce is fermented and used as a topping or in cooking. Fresh soy sauce is light and dark brown. It is sold at a premium and is akin to extra virgin olive oil. This light sauce is used during cooking. Thick soy sauce is thickened with agents so as to be used as dipping sauce or poured over a dish.