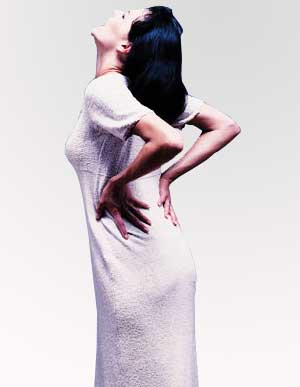 Find out more about endometriosis, its symptoms and treatment options. Understand how endometriosis can lead to infertility.

Endometriosis is a gynecological condition where the tissue that lines the uterus grows outside the uterus. The uterine tissue, known as endometrium grows on the ovaries, fallopian tubes and outer surface of the uterus. In some cases, it is also noticed on the bladder, bowel, intestines, colon, vagina, cesarean and laparoscopy scars. Rarely does endometrial tissue appear on the lung, arms and thighs.

Women suffering from endometriosis may be suffering from a dysfunction of the immune system. It could be due to environmental factors. Endometrial tissue outside the uterus does not get sloughed off during the menstrual cycle. Many a time, the endometrial tissue collects as a large amount of blood in the ovary and forms ovarian cysts. Over time, these cysts can grow considerably and take on a darker color, giving them the name 'chocolate cysts'.

A woman with a family history of endometriosis has 6 times greater chances of suffering from the condition than others. This condition can affect any menstruating woman - from her first period till her menopause. Diagnosing endometriosis may not be easy.

A pelvic examination is conducted on a woman complaining of symptoms of endometriosis. It can reveal the presence of tender nodules in the ovary regions or the posterior vaginal wall. Treatment for endometriosis will depend on the extent of the disease as well as the woman's age. The location of the implants, the depth to which they penetrate the tissue and their overall size contribute in deciding the appropriate treatment for endometriosis.

Since endometrial tissue that forms outside of the uterus has no place to go, it causes pools of blood that cause inflammation and scarring of tissue. This may result in blockage of fallopian tubes. The scarring adversely affects the ability of the fallopian tubes to pick up eggs. It can interfere with ovulation on account of ovarian cysts that may be formed. Infertility is noticed in nearly a sizeable percentage of women suffering from acute endometriosis. In fact, endometriosis is a major cause of infertility. Infertility linked to endometriosis is usually treated with laparoscopic surgery.