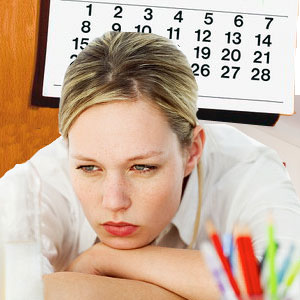 Dysmenorrhea can be debilitating and psychologically taxing for many women. This article outlines the causes of dysmenorrheal and possible treatment for this condition.

Dysmenorrhea or dysmenorrhea is the syndrome of painful menstruation and as such is not life threatening. But dysmenorrhea can be debilitating and psychologically taxing for many women. It can wreak havoc in the day to day life of a woman causing physical strain coupled with emotional distress. Dysmenorrhea is mostly noticed in late teens and twenties and gradually declines with age.

Some women may experience increased menstrual pain in their late thirties and forties as their endocrine systems prepare for menopause by decreasing hormone levels and low fertility. Dysmenorrhea is usually less severe after a woman has had a baby. Read on to learn more about the causes of dysmenorrhea. Understand the various treatments for dysmenorrhea.

Menstrual cramps are caused by strong contractions in the uterus. During a contraction, it sometimes can press against the nearby blood vessels thereby cutting off supply of oxygen to the muscle tissues. Pain results when part of the muscle loses supply of oxygen for a brief period. Dysmenorrhea involves painful cramps during menstrual periods that are accompanied by sharp intermittent pain or dull throbbing pain usually in the pelvis or lower abdomen.

The pain may precede menstruation by several days or may accompany it. The pain usually subsides as menstruation tapers off. While in some women the pain is severe enough to prevent normal daily function, for others the discomfort would simply be annoying. It is also observed that dysmenorrhea is responsible for significant absence from work or school.

Diagnosis of dysmenorrhea is made certain after the physician rules out other menstrual disorders, medical conditions or medications that may be causing the condition. Pelvic ultrasonography is considered in women who are suspected to have secondary dysmenorrhea. Other imaging modalities are also warranted if suspicion of secondary dysmenorrhea is high. A laparoscopy or hysteroscopy may be considered for further investigations.

During menstruation, some pain is common. But excessive pain is not. Dysmenorrhea usually coexists with heavy blood loss. Prominent causes of primary dysmenorrhea are

Use of caffeine or nicotine can worsen dysmenorrhea. It is often found that the degree of dysmenorrhea varies according to the general health and mental state. Certain emotional and psychological factors although cannot cause pain, can worsen the pain or cause some women to be less responsive to treatment. Dysmenorrhea can be found in people with family history of such a condition. Lack of exercise and poor diet can also increase the risk of dysmenorrhea.

Specific treatment for dysmenorrhea is determined by the physician based on certain parameters like:

Usually NSAIDs (Nonsteroidal anti inflammatory drugs) such as ibuprofen and naproxen are very effective in the treatment of primary dysmenorrhea. Oral contraceptives are 90% effective in improving primary dysmenorrhea. They work by reducing the menstrual blood volume and suppressing ovulation. The production of prostaglandins is reduced thereby reducing the severity of the cramps. It may take up to three months for the oral contraceptive to be effective.

Myomectomy, polypectomy or dilation and curettage may be needed in some cases of secondary dysmenorrhea. Endometriosis is treated with several medical options including hormonal contraception like gonadotropin releasing hormone Gn-RH which stops ovary functions and progestational agents. Using heat pads or hot water bottle across the abdomen or back, hot bath or shower may help. Abdominal massages, vitamin supplements and dietary modifications can give some relief from the pain.