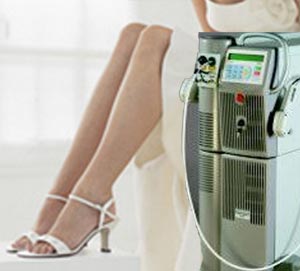 Laser surgery for spider vein is becoming increasingly popular as it is minimally invasive; virtually pain free and unlike other surgeries requires no general anesthesia. Although, laser vein cannot remove or correct all the imperfections of the treated area, the overall results are quite successful.

Spider veins usually called 'starbursts' are tiny veins just beneath the skin, appearing like the shape of a spider. These veins develop most often on the face and thighs, calves and ankles. They are usually blue, purple or red in color and are cosmetically disfiguring. They are termed 'telangiectasias' and they radiate from a central point. Spider veins appear as fine but separate lines akin to a web. They seem to appear like branches from a trunk of a tree shaped form.

The exact cause of spider veins is unknown. Nevertheless, spider veins are related to abnormal blood flow in the affected veins. They most often result from an underlying venous insufficiency. Doctors opine that any activity that can put pressure on the leg veins such as gaining weight, sitting or standing for long duration can cause this development. In women spider veins often appear during pregnancy.

Spider veins may appear due to injury to the affected area, consuming medications that affect hormones like birth control pills, advancing age and also a family history of spider veins. Sometimes overexposure to the sun can cause spider veins to occur in the exposed parts of the body such as nose and face and these appear typically as unsightly red or pink clusters.

These can either be employed independently or in combination.

Sclerotherapy involves injecting a liquid agent directly into the spider veins through a tiny needle, thereby causing them to contract and collapse in the process. This procedure is adopted in case of medium to large spider veins. The therapy is relatively painless and one can expect about 50% improvement in spider veins following Sclerotherapy session.

Transcutaneous laser is used to treat the smallest surface veins. The veins must be close to the surface because the skin can get easily damaged by the ablative energy of the laser.

Usually two to four treatment sessions may be required to achieve the desired results. Although laser treatment may cause minor bruising and redness of the skin, these are bound to improve over time. Recovery is almost immediate in laser treatments.

Who can undergo laser surgery for removal of spider veins?


How effective is laser treatment for spider veins?

One can expect about 70% to 80% improvement in the appearance of spider veins on the face and 30% to 40% improvement in leg spider veins after each laser treatment. The laser has the capability to selectively target and destroy red coloration of the spider veins appearing close to the surface of the skin without damaging the surrounding tissue. Laser procedure is quick and no anesthesia is necessary. The skin is more uniform and natural in appearance after a laser treatment.

Laser treatments for spider vein removal would cost approximately $ 300 to 450 per session. If the veins are extensive and if the treatment is to be performed by a medical physician rather than a supervised technician, it is bound to cost more. A Sclerotherapy session would cost anywhere between $ 100 and $ 400.

Initially, a calibration session is performed on the patient, wherein laser is tried on very small portions of the skin. This is done to determine the laser best suited to the particular patient's skin. The optimal setting is used for the first full session.

The medical practitioner or an assistant cleanses the face of the patient to remove oils on the skin. Superficial blood vessels are removed by a brief intense emission of light emanating from the laser. This is done very precisely at controlled levels of penetration.

In the laser removal, light is made to pass through the skin and pulses of energy are sent to the targeted vein. Care is taken not to harm the surrounding tissues. As the blood absorbs the light, it heats up and causes the targeted vein to shrink which eventually leads to its disappearance. One can hear zapping sounds and smell of smoke as the laser works. The patient is exposed to a minimal amount of heat only. The treated area is covered with an antibiotic ointment in order to eliminate any surface bacteria.

Laser technology has evolved and improved over the last couple of years. Newer laser treatment methods include cooling by contact with metal devices, cold air or small blasts of liquid nitrogen to diminish pain and minimize the effects of heat on tissues.

It may vary between fifteen minutes to even an hour depending upon the size of the spider vein treated and the severity of the problem involved. In most cases, it requires more than one treatment session to achieve best results. Laser removal is performed as an outpatient surgery in the doctor's clinic and there is no need for the patient to stay in the hospital.

A slight burning and stinging sensation may be felt when the laser penetrates the skin. But the pain will be minimal and there is no need for anesthesia. The feeling is similar to a rubber band snapping the skin.

Some redness and swelling of the treated area can be seen after the laser procedure which should disappear within a few days. The veins turn purple in color resembling a small bruise which will gradually fade within a week to ten days. Ice packs are recommended to reduce the swelling. Frozen aloe vera gel is also commonly applied.

Recovery depends on the extent of treatment and the individual patient's capacity to heal. Redness and purple discoloration may persist for several weeks or even longer. But the redness will gradually lighten to a pink tone before more natural color appears.

Laser removal of spider veins may not remove or erase all imperfections of the skin. Nevertheless, most patients are satisfied with the results. The unsightly and cosmetically disfiguring red veins return to a more natural and uniform state over time. But laser removal cannot deter the normal effects of aging and the treatment cannot prevent the occurrence of new spider veins in due course of time.

There could be semi permanent or permanent skin lightening in the treated areas. The skin becomes hyper pigmented and darker immediately following the laser surgery. The darkened skin can be treated successfully with a bleaching agent. The lightened skin tone can be more problematic. While some patients prefer to live with the lightened skin area, some others choose to undergo medical tattooing to even out the skin tone.

Burns or injuries may be caused by the heat from the laser. It is therefore essential to follow the instructions and advice given by the surgeon pre and post laser surgery to avoid potential complications.

Laser surgery for spider vein is becoming increasingly popular as it is minimally invasive; virtually pain free and unlike other surgeries requires no general anesthesia. And although, laser vein cannot remove or correct all the imperfections of the treated area, the overall results are quite successful that patients feel immensely satisfied with the treatment.