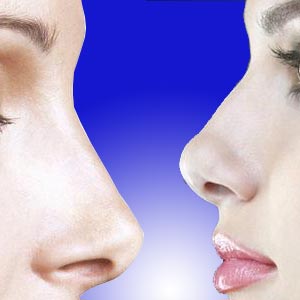 You can get a nose job or rhinoplasty surgery done to enhance the shape of your nose or to correct any functional defect. After all, your nose is a vital element in determining your overall facial looks.

Your nose is a vital element in determining your overall facial looks. A perfect nose would be one which looks good by itself and complements other facial features. Rhinoplasty is a cosmetic procedure that can make your nose shorter, thinner, larger, straighter and smaller.

Statistics disclose that amongst both men and women, rhinoplasty surgery takes a slot within the top five popular plastic surgeries. Leonardo da Vinci was the first man to conduct extensive research on the aesthetic size of the nose for each of his creations. Rhinoplasty is derived from Greek words rhinos - nose and plastikos - to shape.

In simple words rhinoplasty refers to plastic surgery that facilitates to better the function of the nose or improve the appearance of a person's nose. When the surgery is done to improve the nose function, it is called reconstructive surgery. When surgery is used for aesthetic purposes, it is termed cosmetic surgery. Rhinoplasty is also referred to as nose job and is performed to promote aesthetic appearance and to resolve any birth defects or breathing troubles.

Sushruta, a physician who lived in ancient India around 500 BC, also proclaimed as the father of surgery, first developed the rhinoplasty process. Proof of this is established in his written text 'Susrutha Samhita' where it is understood that he and his disciples practiced rhinoplasty on people whose noses were amputated as a penalty for offenses they committed. In 1887, John Orlando Roe was the first surgeon to perform intranasal rhinoplasty. Jacques Joseph was considered the pioneer in altering shapes and sizes of noses as per the requirements of the patient.

Closed technique: The nasal bones are reached by making incisions within the nostril. After the incision is made, the skin is separated from the underlying bones and cartilage. This method leaves back no visible scar. This method brings out the real talent of a surgeon as the visibility is practically zero.

Open technique: The nasal bones are reached by making incisions within the nostril and via the columella. Columella is the skin that segregates the nostril. This routine is chosen for complicated rhinoplasty procedure.


Every year around half a million people take the assistance of plastic surgeons to enhance their looks by working on their nose. Either they don't like the nose they possess by birth or they have some defect that needs to be rectified. Rhinoplasty procedure is not very difficult though it is very challenging and requires skilled hands. The procedure is usually carried out as an outpatient procedure.

You might face these problems of pain, swelling, bruising, a feeling of stuffy nose, numbness for a few months. Abrupt nose bleeds or an infection or late healing are not common, so ensure you can reach your doctor when ever necessary.

Top of the Page: Rhinoplasty
Tags:#rhinoplasty #cost of rhinoplasty