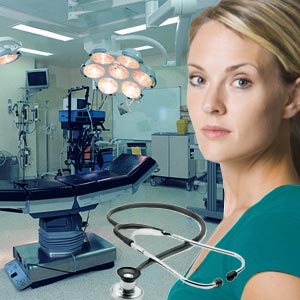 Bariatric surgery is a collective term and it involves a variety of bariatric weight loss procedures.
Restrictive Procedures: These are done mainly to reduce the size of the stomach. The restrictive procedures are done either by using a gastric band (lapband), staples or both. These restrictive operations include

Adjustable Gastric Banding (ABG): This bariatric operation involves the creation of a small pouch in the upper part of the stomach. The pouch has an adjustable band that wraps the stomach about 20 mm below the gastro-esophageal junction, thus leaving only a narrow passage between the pouch and the lower section of the stomach. Due to the greatly reduced capacity of the pouch, patients experience fullness and stop eating. Patients undergoing ABG may lose 60-75 % weight within 18 months of surgery; however it is unclear whether this level of weight loss is sustainable in the long term. The success rates of ABG depend on the post-operative complications and patient-compliance with dietary guidelines.

Stomach stapling involves the use of surgical stapler to create an upper-stomach pouch about the size of a small egg. The surgeon then inserts a polypropylene band to control the size of the pouch exit to the lower part of the stomach and prevent stretching. Stomach stapling severely limits the intake of patients. However, the success of stomach stapling strictly relies on the patient compliance with post operative dietary guidelines.

Malabsorption Procedures: This procedure involves the reduction in the size of the stomach and also bypass duodenum, which is the first segment of the small intestine and sometimes the whole of jejunum, the mid-section of the intestine. The malabsorption procedures/operations include simple and complex bypass procedures. The simple procedures include Roux-en-Y and Fobi Pouch.

The complex bypass operations of the Malabsorption procedures include

Biliopancreatic Diversion: Also known as Scopinaro procedure, biliopancreatic diversion is one of the most extreme malabsorptive surgeries used to treat malignant obesity. Besides the removal of the major part of the stomach this procedure involves the change in the anatomy of the small intestine. The small intestine is changed to divert the bile and the pancreatic juices so they meet the ingested food (arriving via the reduced stomach pouch) closer to the middle or the end of the small intestine. As a result, calorie and nutrient absorption is curtailed.

Duodenal Switch: Instead of bypassing the lower part of the stomach, in a duodenal switch operation part of the stomach is removed leaving a pouch. The small intestine is then cut and reconnected in such way that food travels one way and digestive juices travel another way. This greatly decreases the amount of nutrients, fat and calories that are absorbed from the intake food.

When a person's Body mass index (BMI) is 40 or higher, then he/she might consult the health care provider for a bariatric surgery. Also a person who is 100 pounds or more than their ideal body weight is also an ideal candidate for bariatric surgery. Gastric stomach bypass is a major surgical procedure, where complications cause death in about 1 % of cases. Other complications might include

The patient has to remain on liquid food for the first 2 weeks after a bariatric surgery. Energy drinks, skimmed milk, broth, water and diluted fruit juice are provided. It is highly important to avoid sweetened and/or carbonated beverages in the diet.