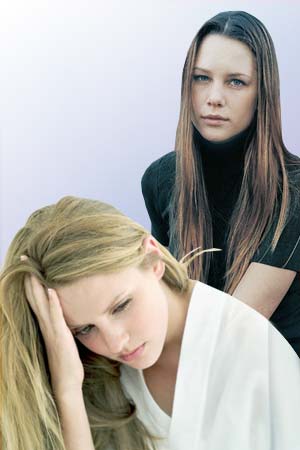 An informative article on symptoms of depression and various anti-depression medications. Learn more about this silent malady and what kind of depression treatment and help is available.

Depression is a condition that is not clearly understood by many. What is this mood disorder and who is likely to suffer from it? What is post-partum depression? Learn how to identify symptoms of depression. Find out how depression is treated with anti-depression medication and therapy.

'Depression' is a mood disorder characterized by feelings of sadness, hopelessness, helplessness and worthlessness. It permeates through the body and mind. Depression lowers motivation and energy levels. This disorder takes control of the mind, body and soul. When depressed, you may often experience feelings of low esteem, guilt and self-reproach driving you to take irrational decisions.

Depression often results from combination of factors - personal experiences, financial problems, tension or trauma in personal life. Whatever be the cause, depression is not just a state of mind. It is related to physical changes in the brain too. Depression is associated with an imbalance of neurotransmitters (chemicals that carries signals in your brain and nerves) in the brain.

There are several forms of depression. Diagnoses for depression are mostly determined by the intensity and duration of the symptoms.

Dysthymic Disorder: Dysthymia is moderate level of depression. Most people go through this disorder even with out knowing that they are affected by dysthymia. These people undergo many changes that affect their quality of life. They may experience fatigue, sleeping and eating problems and be plagued by low self-esteem, guilt and negative thinking. These people may also suffer from concentration and memory problems. While the symptoms of dysthymia are not as pronounced as in clinical depression, they are more enduring and resistant to treatment.

Anxiety Disorder: Anxiety disorders are a form of emotional upsets. The affected person feels highly aroused and is afraid of a panic attack. An anxiety disorder is a constant feeling of tension and a person affected by this will have no reason for the way he/she feels.

There are indications that postpartum pregnancy is common in women who have already experienced some form of depressive illness. Postpartum depression can happen anytime within the first year after childbirth. The symptoms of this disorder may include sadness, lack of energy, trouble concentrating, anxiety, feelings of guilt and worthlessness.

Signs and Symptoms of Depression

The following are some of the most common symptoms of depression. Depression isolates, disables and contributes to deteriorating physical as well as emotional health. The severity of these symptoms may vary from person to person.

Anti depression drugs are medications used to relieve and cure depression. They are used to treat serious, continuing mental depression that interferes with a person's ability to function. These depression medications help reduce the extreme sadness, hopelessness and lack of interest in life that are typical in people with depression.

Sometimes this may involve trying more than one medication or a combination of medications. Never change your dosage or discontinue your medication without talking to your doctor. The list of medications provided here is just for information and does not replace your consultation with the physician. Some antidepressants prescribed by physicians include

Zoloft (Sertraline) is an anti depression drug indicated for the treatment of mental disorder. It improves a depressed person's mood. This medication is generally prescribed for people with an obsessive compulsive disorder, panic attacks, post-trauma stress or anxiety disorders. Zoloft works by increasing the activity of the chemical sertonin in the brain.

Talk Therapy: Apart from medication, your health care professional at a depression treatment center may also suggest psychotherapy or talk therapy in order to relieve your mental disorder. Psychotherapy can be used alone or in combination with other treatments and depression medications. However talk therapy is well suited to treat cases of mild to moderate depression. People with severe forms of depression may not benefit from psychotherapy until their symptoms have been lifted through another means of treatment. Interpersonal, groups and family can provide depression help.

Deep Brain Stimulation: Deep brain stimulation therapy is used to help depression patients, who do not respond to psychotherapy or ECT. Deep brain stimulation is based upon the observation that a region of the brain called Brodmann area 25 is metabolically overactive in treatment-resistant depression. However, there are not enough studies to prove the effectiveness of this therapy.

There are many depression support groups available both online and offline. Psychiatrists and psychologists of these centers help the depressed person through regular counseling. With the development in technology, there are also many online depression forums to help support the depressed one.

Top of the Page: Symptom of Depression
Popularity Index: 101,741