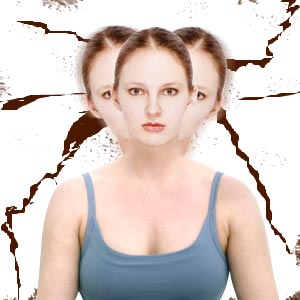 Schizophrenia is a mental illness that can incapacitate and even kill a person. Schizophrenia results in hallucinations, delusions and disordered thinking and behavior.

About 2.4 million schizophrenics live in America estimates the National Institute of Mental Health. Approximately 1% of the entire population of the world is schizophrenic.

Schizophrenia results in hallucinations, delusions and disordered thinking and behavior. Schizophrenics withdraw from both people and activities around them. Instead, they seem to retreat to an inner world marked by psychosis.

Although the exact cause of schizophrenia is not clearly established, there could be a combination of factors that can differ from person to person. Some well known causes include genetics, changes in the brain chemistry, brain damage before or during birth, stress, family problems, childhood deprivation and substance misuse, which is known as drug induced psychosis. Although some may be born with a genetic predisposition toward schizophrenia, stress and life experiences can trigger the onset of symptoms.

Signs and symptoms of Schizophrenia

Whereas schizophrenia can range from mild to severe; there are people who may be able to go about their daily life reasonably well while others may require specialized intensive treatment.

Over a period of time it would become difficult to function in daily life with schizophrenia. Relationships could get troubled due to inability to read social cues and other's emotions.

Schizophrenics generally are aware of the time and place they are in but sometimes they may become confused due to disordered thoughts. They could lack insight into their condition and it would become difficult to organize them.

Schizophrenics suffer a delusion that they are under control of another influence. They feel that thoughts are being put into or taken out of their mind. Unfortunately, a schizophrenic never knows he/she is experiencing such symptoms of illness.

Chronic schizophrenics may do nothing for long periods of time, or engage in purposeless activity repeatedly. Their self neglect is quite marked. Hallucinations and delusions are common in acute condition.


Even extensive research has not been able to clearly reveal if schizophrenia can be hereditary as the causes still remain generally unknown. Schizophrenia is caused by a combination of both genetic and social factors and much depends on the individual's circumstances. While genetic makeup can put a patient at a higher risk, a stressful life can trigger possible symptoms of the illness.

Although there is 'no gene for schizophrenia,' a family history of the illness can increase the risk of being affected. Schizophrenia is seen to run in families and it is established that

Schizophrenia types depend largely on the specific symptoms a person experiences. Since the symptoms are bound to change over time, it is possible to have more than one type of schizophrenia in a patient's lifetime.

Paranoid schizophrenia is the most common form of the illness and the primary symptoms include grandiose delusions and hallucinations. Disorderly thought, disorganized behavior and affective flattening are some of the prominent symptoms. Auditory hallucinations of hearing voices and a strong belief that others are deliberately cheating, harassing, poisoning, spying or plotting against them indicate paranoid schizophrenia.

Disorganized schizophrenia results in unusual thought processes. Garbled speech, illogical thoughts, 'thought blocking,' where a person stops abruptly in the middle of a thought and unintelligible words or 'neologisms,' are symptoms of disorganized type.

Catatonic schizophrenia can be clumsy and uncoordinated behavior and involuntary movements and unusual mannerisms. Repetitive motions, which could be catatonic in extreme cases, may result. Catatonia as such, is a state of immobility and unresponsiveness which is very rare these days.

Residual schizophrenia seems to occur in those with long term schizophrenia. These patients exude negative symptoms such as flat effect, with immobile facial expressions, lack of pleasure in life, disability to any planned activity and infrequent talk even when forced to interact. They lack any positive symptoms and neglect basic hygiene and need help in performing everyday life activities as well.

Undifferentiated schizophrenia is when the patient exhibits symptoms not consistent with any other form of the illness.

Schizophrenia is usually treated by a professional psychiatrist and a team consisting of psychologist, social worker and psychiatric nurse.

The conventional anti psychotics have remained effective traditionally in managing positive symptoms of schizophrenia. They could have potentially severe neurological side effects. The newer atypical antipsychotics are effective in managing both positive and negative symptoms. But these pose a risk of metabolic side effects like weight gain, diabetes and high cholesterol.

Possible side effects of antipsychotic medications:

Incase a medication does not work well for a patient and he/she has intolerable side effects, the treating doctor recommends combining and switching of different medications and sometimes adjusts dosage. The danger here is that if one stops taking medications, the relapse of psychotic symptoms could occur. Anti psychotic medications needs to be tapered off and cannot be stopped abruptly.

Many schizophrenics smoke and they may require an additional dosage of medication as nicotine interferes with medications. Alcohol and drug abuse can worsen schizophrenia symptoms. A positive family intervention should help maintain periods without illness. It can also help with social skills and psychological therapy allowing schizophrenics to lead productive and enjoyable lives.