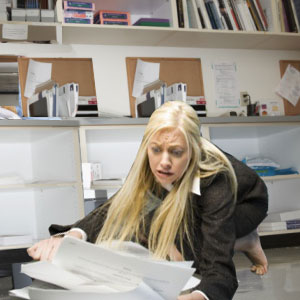 Extremely disturbing thoughts, persistent worries, feeling compelled to repeatedly perform certain acts supposedly to control such thoughts - you or someone you love could be experiencing this kind of a condition. Simple examples of such acts are washing hands over and over again or locking and unlocking a door repeatedly. These are signs of obsessive compulsive disorder, a kind of anxiety disorder.

Obsessive compulsive disorder is not gender specific. Both men and women can be equally affected. In women, the symptoms are usually visible during early 20s and in men from 6 to 15 years of age. Further, the chance of developing OCD is above average in first-degree relatives of affected people. In such instances, the symptoms are visible between the ages of 18 and 30.

Women affected with obsessive compulsive disorder are likely to experience a worsening of symptoms during pregnancy and postpartum. The fluctuating hormones, concerns and apprehensions related to motherhood responsibilities can result in a higher level of anxiety, which in turn lead to associated behavior.

To have a few obsessional thoughts or minor compulsions is quite acceptable. A person may at times feel anxious. The anxiety wanes away once the task or stressful event is over. Likewise, most of us strive towards perfection and perform related chores a number of times to accomplish perfection. Such behavior cannot be misconstrued as signs of obsessive compulsive disorder.

It is the quantum that defines the disorder. Unlike normal anxiety, people affected by obsessive compulsive disorder tend to experience unusually higher levels of anxiety. It begins to interfere with everyday normal functioning taking up time and energy, mars normal routine and relationships.

The sufferers have persistent thoughts, pictures or impulses (obsessions), which may compel them (compulsions) to repeatedly perform certain 'acts' in order to neutralize the anxieties. Most people affected with OCD are aware that their obsessions and compulsions are senseless. Yet they feel powerless, are unable to ignore or stop them.

In response to obsessions, persons affected with OCD feel compelled to perform certain acts such as:

The exact cause of obsessive compulsive behavior is yet to be established. On the basis of some studies and research carried so far, possible causes include any one or a combination of two.

Genetics (family history): Multiple genes passed on through generations are likely to affect the sufferer whose close relative is diagnosed with OCD as well. The genetic connection proves to be higher if the onset of OCD is before age 14. Identical twins have a 70% chance of sharing the disorder.

Illness: If the person is suffering from other anxiety disorder like depression, eating disorders, substance abuse disorder, a personality disorder, attention deficit disorder, he or she is most likely to experience a high level of anxiety. Certain auto immune diseases such as Sydenham's chorea, rheumatic fever, pediatric streptococcal infection may also cause obsessive compulsive disorder.

Serotonin Hypothesis: People diagnosed with OCD are believed to have abnormally low levels of brain chemical, the serotonin which helps carry messages from one nerve cell to another. This imbalance may interfere with the normal biological processes including mood, sleep, appetite, impulse control, aggression and pain.

Structural brain differences: Abnormalities in several parts of the brains including the thalamus, caudate nucleus, orbital cortex and cingulated gyrus may also be a cause for OCD.

Also referred as anankastic personality disorder, the condition is characterized by a chronic preoccupation with rules, orderliness, and control. It is linked to the personality of the individual. Highly judgemental, individuals with OCPD believe only his/her way is correct and all others are incorrect and unacceptable. Research indicates that people with OCD acknowledge their acts are indeed irrational while people with OCPD will explain their actions as rational. Individuals with OCPD derive pleasure as compared to those affected with OCD who feel almost helpless unable to contain performing ritualistic acts.

The disorder is clearly visible right from early childhood. Check for one or more of the following traits which are generally associated with time, dirt, relationship and money. Unless and until the individual has trouble leading a normal life due to any or all of these traits, it is not diagnosed as a disorder.

If left unattended, OCD or OCPD can have devastating effects both in personal life and at the workplace. Normal life can be completely marred. Most importantly, individuals with OCD are close to acknowledging the need for help as compared to those affected with OCPD who do not conceive it as a problem, hence do not seek help until or unless someone forces the issue.

Antidepressant medications and behavior therapy are effectively used in treating OCD. Medication other than certain antidepressants is rarely prescribed. Instead individual psychotherapy or counseling helps treat OCPD. With family support and an empathetic attitude by those in contact, improvement is evident within few weeks of professional assistance.