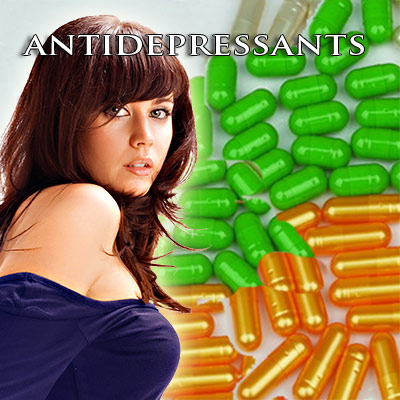 Antidepressants should be taken consistently or as prescribed in order for them to work effectively on your body. Initial use of antidepressants can make you feel tired, cause trouble sleeping or mild pain in the stomach. Find out more about antidepressants and weight gain.

Antidepressants are psychiatric medications that alleviate mood disorders like depression, dysthymia, anxiety disorder, obsessive-compulsive disorder, eating disorders, chronic pain and hormone mediated disorders such as dysmenorrhea. These medicines work by slowing the removal of certain chemicals called neurotransmitters from the brain that are vital for mood related activities.

Antidepressants may also be combined with other medications in treating certain disorders. For instance, when combined with anticonvulsant like Tegretol or Depakote, antidepressants can treat attention-deficit hyperactivity disorder (ADHD) and substance abuse by addressing underlying depression. It takes time for antidepressants to work and hence your physician might prescribe a dosage that lasts from months to years.

Antidepressants are classified based on their performance. In other words, they are divided into groups based on which chemicals in the brain they affect. Few of them include:

Selective serotonin re uptake inhibitors (SSRIs): This variety of antidepressant is prescribed in patients who have an inadequate amount of serotonin, a chemical used by the brain to transmit signals to neurons. SSRIs work by balancing the serotonin levels in the brain. The family of drugs that belong to SSRIs are:

Selective-norepinephrine re uptake inhibitors (SNRIs): This is a new variety of antidepressant that work on both norepinephrine and serotonin, the chemicals of brain that are vital for mood reflections. The drugs of this family include:

Tricyclic Antidepressants: One of the oldest antidepressant drugs, tricyclics work by blocking the re uptake of neurotransmitters like norepinephrine and serotonin. These drugs are least preferred or prescribed these days, since more selective and safer drugs are found to slow the removal of certain neurotransmitters. The drugs under this family are:

Norepinephrine and dopamine re uptake inhibitors (NDRIs): This variety of antidepressant slows down the neuronal reuptake of dopamine and norepinephrine, brain chemicals used in signal transmission. Drugs of this family include

Side effects associated with NDRIs are agitation, nausea, headache, loss of appetite and insomnia. NDRIs are also found to increase blood pressure in some people.

Monamine oxidase inhibitors (MAOIs): These are less commonly used antidepressants because of their fatal interaction with some foods. MAOIs are prescribed when other class of antidepressant medications are ineffective. The drugs of this class work by blocking the enzyme monoamine oxidase, which breaks down the neurotransmitters dopamine,serotonin, and norepinephrine (noradrenaline). MAOI medication include

Serious side effects associated with MAOIs include weakness, dizziness, headaches and trembling. When MAOIs are combined with other class of antidepressants or certain over-the-counter medications for cold and flu, they can cause a dangerous reaction. Your doctor will advise you on what food and alcoholic beverages you should consume while on an MAOI. Remember to follow them, failing which might lead to dangerous consequences.

Weight gain is the most common side effect associated with antidepressants like tricyclics (TCA), and monoamine oxidase inhibitors (MOAIs). However, selective serotonin reuptake inhibitors (SSRIs), with certain exceptions and Bupropion (Wellbutrin) are less likely to cause weight gain than other antidepressants.

There is no clear definition on why antidepressants cause weight gain, although it is thought that these medications may somehow influence metabolism or appetite. Though weight gain is a possible side effect with antidepressants, it is reversible once the medication stopped. To reduce weight gain while on antidepressant, follow few strategies like eating healthy and working out regularly in the gym. Also talk to your doctor on other options for reducing weight.

Pregnant women are always left with a difficult choice when it comes to antidepressant. There are few studies that indicate the risks of continuing the medication while pregnant. Recent research indicate that drugs SSRI class of antidepressants like Prozac (fluoxetine), Zoloft (sertraline), Luvox (fluvoxamine), Paxil (paroxetine), Celexa (citalopram) and Lexapro (escitalopram) are relatively safe during pregnancy.

A study published in the New England Journal of Medicine indicates that babies develop persistent pulmonary hypertension in cases where the pregnant mothers have continued to take antidepressant drugs especially during the third trimester. However, the study claims this condition in newborn babies to be a very rare.

While another study published in the Archives of Pediatrics and Adolescent Medicine, found that nearly one-third of newborns whose mothers took SSRIs during their pregnancy experienced neonatal abstinence syndrome. Infants who experience this syndrome have symptoms such as high-pitched crying, tremors, disturbed sleep, gastrointestinal problems and hypertonicity, which is an abnormal increase in muscle tone. While no medical intervention is necessary for this syndrome, it is uncomfortable for the child.

However, there is no clear evidence of fetal abnormalities by taking antidepressants. Hence, pregnant ladies are advised to inform the doctor about their antidepressant medications beforehand to avoid further complications.

Avoid alcohol when you are on some medications especially antidepressants. Because combing alcohol and antidepressant medication can worsen your state and cause dangerous reactions. Tyramine, a substance found in beer and wine can interact with MAOIs leading to dangerous rise in blood pressure, resulting in stroke.

Antidepressants should be taken consistently or as prescribed in order for them to work effectively on your body. Discontinuing the antidepressant medications without your doctors' advice may worsen your depression and other related disorders.

Top of the Page: Antidepressants and Weight Gain
Popularity Index: 100,393