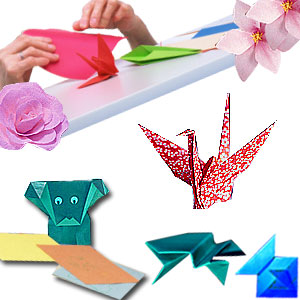 Origami is derived from 2 Japanese words - 'oru' which means to fold and 'kami' which means paper. With right paper folding techniques, you can watch interesting shapes and creations unfold before your eyes. Origami paper art is popular with adults and children alike. It is often used as a teaching aid or hands-on activity. Read up more on the history of origami and how it came to be a popular craft activity the world over. Learn to make origami flower, be it rose, lotus or tulip. The use of the right origami paper enhances the effect of the models created.

Origami involves following precise instructions for paper folding in intricate ways to come up with various forms and designs. Usually scissors or glue is not needed. Simple origami birds and animals are ideal craft projects for kids. They will be thrilled to see wonderful shapes unfolding from their creations. But origami is not just for kids alone.

Very intricate and attractive pieces can be crafted with origami. In fact, with sufficient practice and origami instructions, you can even fashion origami chess set. Intricate origami patterns involve creating a leaping gazelle or even the Eiffel Tower. Innovations in origami art involve use of crinkling techniques, wet folding and smoother designs. In fact, creating miniature origami models can be a real challenge even to a deft paper folder.

Origami as a craft inculcates creativity and patience. This inexpensive and fun hobby can keep you enthralled for hours on end. Be it a simple paper boat or elephant, learning to make origami objects with paper folding can bring joy and serve as a stress reliever. Pick up an origami kit to get started. Follow origami instructions to make boats, animals, water balloons and other toys.

Follow instructions and you should be able to make origami flowers quite easily. A typical origami rose is made of 4 pieces of paper - three for petals and one for the leaves. You can make a blossoming flower, lotus or even an origami orchid. Ideally origami models must possess a strong outline and must be pleasing in appearance. The final origami flower or bird or other model must not have design flaws. The paper folding must follow a logical pleasing sequence.

As ancient beliefs go, if you make 1000 paper cranes (senbazuru), your wishes will come true. Origami cranes are used as good luck symbols as well as peace symbols. In Japan, 1000 cranes are given to sick people hoping for a speedy recovery. Cranes are placed as peace offerings in parks of Hiroshima and Nagasaki.

Various folds are designated names so as to make for easier instructions in origami. Origami instructions include geometric folds, crease patterns and directions. This craft offers origami models that can be tried out by anyone, from raw origami enthusiasts to advanced paper folders. Origami instructions are available in many a paper folding web site. It is essential that the paper is cleanly folded and creased. There must not be any tears or rips on the paper. The corners must have perfect right angles.

A valley fold indicates an origami instruction so as to create a gully in the paper. On the other hand, the peak fold is just the opposite. This origami fold resembles a tent and is often referred to as a mountain fold too. Fold and unfold instructions in origami are used for pre-creasing. Crease lines must be created according to origami instructions.

Very thin paper for origami might result in tears. Use of heavier paper may not give best results when you fold it as per origami instructions. Another option for origami is foil-backed paper. This type of paper has a sheet of thin foil attached to it. This helps in unfolding the foil layer in different folds and creases. Paper with single colors, animal or geometrical prints is used to make exciting origami dragons, turtles, flowers and more!