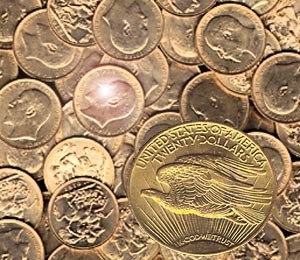 Basics of stamp and coin collection including tips and tricks for novice collectors - An interesting article on the hobby of coin collecting.

Coin collecting is often referred to as the 'king of hobbies' or 'hobby of kings' as it was considered a preoccupation with the rich and the wealthy. Coins can speak volumes - they tell you tales of days gone by, of great leaders, royalty and periods of time. Coins embossed with great faces such as those of Julius Caesar or Alexander the Great or Napoleon or George Washington are reminiscent of a specific period in history.

While some people are passionate about historic coins, others collect coins in the hope that they will appreciate in value. Coins in gold, silver and platinum have high bullion value. Numismatics is the hobby of coin collecting - including paper money, tokens and medals.

Coins are grouped on the basis of the country of origin. You can also collect coins that are specific to a time period in history. Many a numismatist collects coins that are part of a series - such as Lincoln pennies or US gold eagles. Medallions and commemorative tokens are another special category of coins.

Some collectors invest in coins for their intrinsic worth or for the pleasure of owning beautiful artwork. The American Numismatic Association (AMA) has laid down different grades to identify coins and their condition. The best value for a coin that has not been in circulation is when it is in mint state - its luster and appeal intact.

There is no dearth of coin clubs; coin collection price guides and web sites that give you detailed information on some of the rare coins and their availability. You can participate in online discussions and forums with other passionate coin collectors. The value of a coin is determined by the following factors:

Some of the exotic coins that many a collector would like to get his hands on are cocoa bean money of Mexico, glass money from ancient Egypt and bullet money from Thailand. US coins have a big market among coin collectors. From the earliest gold coins to the Lincoln Cent, Eagle Gold Dollar and the Indian Dime, coin collectors buy coins that interest them. The 1804 Dollar, the 1913 Liberty Nickel and the 1933 Saint Lincoln Cent are some of the special US coins.

It is essential to store your coin collection safely. Air oxidizes metal and changes it color. It would be advisable to store your coins in appropriate containers with packets of silica gel so as to control the atmospheric moisture content. There are special holders and containers for numismatic collections.

Invest in a good one so that your valuable coins are well preserved. You can choose from folders, albums and capsules that allow you to store coins carefully. Experts advise coins to be stored at a moderate temperature, low humidity and sealed in a hard plastic holder or slab, a sonically sealed encasement.

Handling coins with fingers may reduce the coin's grade overtime. The unwritten code is to handle the coin by its edge. A coin is placed on velvet pads when it is on display - this brings out their inherent beauty, be it a shiny medallion or an ancient coin with a patina.

If you are investing in rare coins for their value, you must keep abreast of the volatile coin market. Buy coins whose value is graded and authenticated by leading independent grading services. Coin collecting value does not rapidly increase - patience is of the essence here. On an average, rare coins need to be held for at least 10 years before you can expect any profits.

It is essential to invest in actively traded coins, if you are looking for profits from them. If you are a coin connoisseur, then you can indulge in rare and esoteric coins that may not carry high resale value.