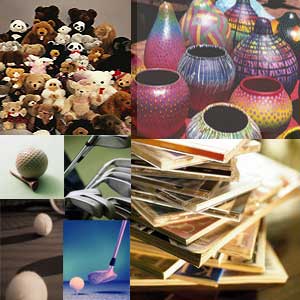 The collectible hobby can range from collecting NASCAR or sports collectibles to Barbie dolls or art figurines. This is a hobby that is created by the collector's interest in a particular item.

As children, we collect a lot of things and this desire to collect continues to grow as we get older. From toys to car hubcaps to matchbooks, just about anything can become a collectible hobby. Generally the world of collectibles is limited only by the imagination and desire of the collector. A collectible can be broadly classified as an article that is mass produced and is in demand by numerous people thereby creating a market for that article. Collectors collect anything that holds personal value to them and recounts special attraction.

In the early 20th century, cast-iron vehicle toys were in style as collectibles. During 1960s action figures, super hero comic books were popular as collectibles. There are companies that create articles for collectibles and market them. There are articles that are pushed to the collectibles slot because of their growing popularity. These include limited edition porcelain plates and figurines and hot wheel cars and Barbie dolls. Some collectibles are bought and sold frequently thereby increasing their value and there are items that are collected to be rarely parted with. Collectibles can be broadly classified into three categories:

In the early stages, collectibles were given along with some product. Examples include a set of cards in a pack of cigarettes so as to promote the market for that particular product. Nowadays collectibles are sold separately as items of interest. Millions of people worldwide indulge in the hobby of collecting collectibles.

One point of view looks at any item that falls outside the traditional antique category and brands it a collectible. The initial evidence for collectors dates back to 1880s when images of popular characters were used to endorse products. Psychologists note that people collect items to drive away loneliness or to overcome the feeling of anxiety and mainly to link to their childhood. Each collector focuses on a particular object and arranges his collections around that particular item.

Collectible figurine: Figurine is a miniature appearance of a figure, and widely refers to a small man-made statue that symbolizes a human or a deity. They are smaller than the original size of humans and may be realistic or iconic depending on the talent and the purpose of the designer. In earlier times, figurines were made from stone but now collectible figurines are made from wood, metal plastic etc.

Figurines of pregnant women called the Venus figurines were the first models to be designed. Evidence of two oldest figurine collectibles dating to a few thousand years back were found in Asia and Africa. Europe boasts of holding a figurine dated back to 25-30,000 BC made of ceramic.

In modern days, figurine collectibles with moving parts have also been developed. Figurines are also extensively used in board games such as chess. Miniatures are used to signify their characters location and facing the map. Figurines that are stationary figures are widely used in comics.

Few collectors choose to center on a particular area within their region of common interest. For e.g. a basketball enthusiast may focus on collecting Los Angeles Lakers. Michael Jordan is the most sorted after among the basketball players. Today's celebrities include Ben Roethlisberger, Shaquille O'Neil, Nomar Garciaparra, etc.

The cost of these collectibles is proportionate to the popularity level of the sport and the sports person it represents. The complete nascar collectible business is determined by supply and demand. A better quality collectible costs more than the rest and the ones that are not manufactured in bulk cost more.

Art collectible: The saying goes, “Life is an art”, and experts say interest expressed in anything is also an art. Any item that is manufactured and crafted sensibly and with a display of talent refers to art collectibles. A person may collect anything from coins to stamps and notes. Rare items among the coins and stamps are very precious and hard to find and hence art collectors love to treasure them. On a wider perspective, stamp and coin collecting can be considered as the new types of art collectibles.

Collectible doll/ Barbie collectible: In the United States doll collecting is said to be the second biggest hobby. This doll collectible hobby is gaining popularity in the international level too. There are various dolls that can be collected such as Barbie dolls, antique dolls, cloth dolls and ethnic dolls, American girls, artist dolls etc. Madame Alexander dolls were the trend in the 1970 and 1980 while Barbie dolls are the rage since then. Collecting dolls is a personal issue and varies from person to person depending on their interest. Collecting dolls begins from childhood and there is a range of dolls that are collected.

Coca-cola collectible: The modification of what is collectible has motivated collecting activity from items such as art, stamps and books to merchandised goods linked with popular brands such as Coca-cola and McDonalds. This type of collecting hobby is also known as brand collectible hobby.

These brands promote their business using collectibles that is endorsed by their brand. Any consumer is attracted to a product first by its appearance than by its taste and other factors. Coca-cola collectibles endorse coca-cola product and let the consumer collect these items as a hobby.

Collectible plates: Paintings of various eras are represented on plates and they are collected as a hobby. Collectible plates often represent a variety of arts and forms and are used for wall décor. Plates can be made of paper, metal or even plastic depending on the art form. Protestant worships often use collectible plates at the end of their worships to collect charity and donations for their services.