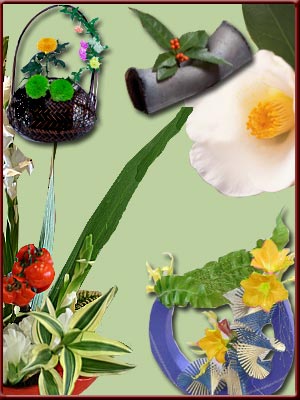 Ikebana, ('living flowers'), the world famous Japanese way of flower arrangement is the art of arranging cut stems, leaves and flowers in vases and other containers in an attractive and soul stirring manner. It is one of the traditional art forms of Japan.

The relationship between the materials, the style of arrangement, the size, shape and texture of the ikebana vase, and the place and occasion for its display are all some of the important factors which go into creating an Ikebana. Its asymmetrical form and the use of space as an essential feature, distinguishes it from other flower arrangements. A sense of harmony is vital to Ikebana flower arrangements.

With the introduction of Buddhism from China, the custom of floral offerings to the Buddha and the souls of the dead also took root in Japan. The offerings of flowers took the form of a simple, symmetrical composition of three stems, representing the earth, heaven and man. In the early seventeenth century, the Buddhists monks of Ikenobo school created a style called 'Rikka'. Rikka literally translates into 'standing flowers'. This was an elaborate art form, done in tall bronze vases; wherein the main branch represented the heaven or truth.

Numerous other branches had their own symbolic meaning and decorative function. In stark contrast to Rikka, the 'Chabana' originated as a part of the tea ceremony. Chabana literally means 'tea flowers'. Chabana comprised one or two flowers or branches in a small container, suggestive of simplicity and spontaneity. These two styles were the cornerstones upon which all the further schools of Ikebana were built. Also, Ikebana, once the exclusive domain of monks and members of aristocracy, came to be practiced by common men and women.

Ikenobo: In Japanese Ike means 'pond', while the word 'Bo' means 'a priest's hut'. The two words combine in the name of the family that has headed this form for generations. This is one of the oldest forms of Ikebana and comprises of two sub styles - the Rikka and the Shoka.

The Ohara School: In this form, Ikebana is done in a low bowl, using some of the shorter stemmed western flowers.

The Chiko School: In this school, in addition to the container and floral materials, accessories such as seasonal fruits, vegetables, ornament, doll or other artistic objects are also used. Combining the beauty of flowers with these non-floral materials is intended to represent harmonized refreshment.

The Ichiyo School: This school encourages personal interpretation. Flower arrangement should be a reflection of oneself. Materials are combined together through a natural balance of their weights instead of fastening the materials down.

The Kozan School: In this school, materials are arranged naturally, according to the characteristics of each plant. Here the underlying principle is 'arrange plum trees like plum trees, peach trees like peach trees.' If the heart of the plant is understood properly, the form will reveal itself. The students of this school study the natural characteristics of each plant and do not follow any specific rule or form.

Ryusei-Ha: This century old school encourages encouragement and innovation with regard to materials. Students of this school not only master the traditional forms, but they also create free style models that blur the boundaries between flower arrangement and sculpture. Also, instead of artificial containers, natural materials are used as containers. Here, freestyle Ikebana arrangements are practiced.

Saga Goryu: This school's motto is to unite flowers and religion. Before starting the flower arrangement, the person calms himself by reciting a Buddhist chant. This school aims to introduce visual and spiritual pleasure in day to day life through Ikebana. It attempts to enhance people's ability to recognize the beauty of flowers with a refined sense.

A number of techniques are used to preserve the freshness of plants. Chemicals are applied to the base of stems to retain their freshness. Stems are also burnt, crushed or boiled to help them stay fresh for a longer period of time. Another common method is to cut the base of the stems underwater and use them immediately. To infuse freshness into wilted plants, they are cut under water and the stems are left submerged for at least 30 minutes.

Most Ikebana flower arrangements are of two kinds - Moribana and Nageire. Moribana is arranged in shallow containers with a needle point holder. Thick branches are cut diagonally and the cut end is split lengthwise so that it is easily inserted in to the needle point holder. Flowers and plants with soft stem are cut horizontally and inserted directly into the needles in an upright position, and then slanted in the required angle.

When thin materials like grass is used, then an additional short piece of any material is tied to the base to lend thickness. When arranging in tall vases, stems can be either broken and fixed or cut and fixed. A thick stem is cut into two, one of them being the base. The base can be fixed either horizontally or vertically and the other stem should be split at the base and affixed in the base stem. This is a self supporting method.

Traditionally, bronze and ceramic containers were used as ikebana vases. In addition to these, sections of bamboo, lacquer ware, dried gourds, glass, steel and other substances are also commonly used. The ikebana vase is chosen based on the kind of flower arrangement that is planned.

'If a man finds himself with bread in both hands, he should exchange one loaf for some flowers; since the loaf feeds the body indeed, but the flower feeds the soul.' This anonymous saying sums up the feelings and emotions which flowers can inspire within us. Ikebana flower arrangements with their minimalist and asymmetric style can speak volumes.