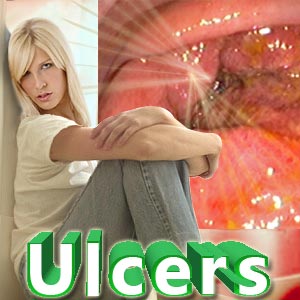 If you suffer burning feeling in the stomach area and also experience loss of appetite and chest pain, check out the symptoms of stomach ulcers and their possible causes. Understand how stomach ulcers can be reduced and treated with medication and lifestyle changes.

It is popularly believed that spicy foods causes stomach ulcers but in fact it is a bacteria called H Pylori that is the main culprit. And while it is believed that generally adults in high stress jobs are those affected by ulcers, even children can develop ulcers.

What is a stomach ulcer?

A stomach ulcer, most commonly referred to as peptic ulcer, is a small erosion in the gastrointestinal tract. Ulcers are not contagious or cancerous. The size of the stomach ulcer may range from 1/8 of an inch to 3/4 of an inch.

The most common type - duodenal ulcer occurs in the first 12 inches of small intestine beyond the stomach. Ulcers of the stomach are called gastric ulcers. Duodenal ulcers are benign most of the times while stomach ulcers may get malignant.

Destruction of the gastric or intestinal mucosal lining of the stomach by hydrochloric acid is the cause of peptic ulcers. The hydrochloric acid is usually present in digestive juices of the stomach. Infection with the bacterium Helicobacter pyloricus (H pylori) plays a major role in causing both gastric and duodenal ulcers. H pylori bacteria infect more than a billion people worldwide. This infection usually persists for many years, leading to ulcer disease in 10% to 15% of those infected.

Signs and symptoms of ulcer disease are variable. However, the major sign and symptom of an ulcer is a burning or gnawing feeling in the stomach area that lasts between 30 minutes to 3 hours. This pain is often interpreted as heartburn, indigestion or hunger. The pain is usually felt in the upper abdomen or below the breastbone.

Some individuals experience pain immediately after eating. In some, the pain may not occur until a few hours after eating. The ulcer pain can awaken persons in the night. Weeks of pain may also be followed by weeks of no pain at all. Pain can be relieved by drinking milk, eating, resting or taking antacids.

There are instances of ulcer patients experiencing minimal indigestion and no discomfort at all. In some patients, there is persistent pain even after an ulcer is completely healed by medication. Others experience no pain at all even though ulcers do return.

Ulcers can come and go spontaneously without the individual even knowing about it unless a serious complication such as bleeding or perforation occurs.

Other symptoms of ulcer are loss of appetite and weight loss. Persons with duodenal ulcers may experience weight gain because these persons eat more to ease discomfort. Recurrent vomiting, black stool, blood in the stool and anemia are other symptoms.

Although peptic ulcer is rare in kids, it is imperative to see the doctor if the any of the following symptoms are noticed:

Though these signs and symptoms are common in most childhood illnesses, they do not necessarily indicate an ulcer. But it is essential to consult a doctor. After viewing the child's medical history and symptoms, the doctor may refer the child to a pediatric Gastroenterologist, for further evaluation and treatment.

An upper gastrointestinal barium (GI) series may be done to get a close look at the gastrointestinal tract. An upper GI series is a set of x rays of the esophagus, stomach and duodenum. The barium upper GI x-rays are easy to perform and involve no risk or discomfort. Barium is a chalky substance administered orally. Barium is visible on x ray, and outlines the stomach on x ray film. However, barium x rays are less accurate and may not detect ulcers up to 20% of the time.

An upper Endoscopy may also be done if an ulcer is suspected. This procedure, performed under sedation involves inserting an endoscope, a small, flexible tube with a tiny camera on the end - down the throat and into the stomach and duodenum. This test lets the doctor view the lining of the esophagus, stomach and duodenum to check for possible ulcers, inflammation or food allergies.

Upper Endoscopy has an advantage of having the capability of removing small tissue samples or biopsies to test for H pylori infection. Biopsies can be examined under a microscope to exclude cancer. Virtually all duodenal ulcers are benign and gastric ulcers can get occasionally cancerous. Such biopsies help exclude cancer.

Tissue tests are performed to check for H pylori. The Endoscopy is sometimes used with a test called pH probe in which a small wire is inserted into the lower part of the esophagus to measure the amount of acid going into that area.

The primary goal of any treatment for ulcer is to relieve pain as well as prevent the complications of ulcer such as bleeding, obstruction and perforation. Therefore the first step of treatment involves reduction of risk factors such as NSAIDs and cigarettes and the second step is medication.

Antibiotics are normally taken over a period of two to three week period and antacids for nearly two months or even longer. Normally it takes two months for the ulcer to heal and it would take a few days or weeks for the pain to recede. To ensure that the ulcer has healed, a stool test is done to verify the absence of H pylori. If the symptoms persist or worsen, an Endoscopy follow up test is done 6 months to one year later to check for H pylori.

The treatment of ulcers due to NSAIDs often include surgery and usually improve with an acid suppressor and stopping or changing of the NSAID. There is no need to treat this type of ulcer with any antibiotics.

Since coffee stimulates gastric acid secretions and alcohol can cause gastritis, moderation in alcohol and coffee consumption is often recommended for adults.

In the past, it was believed that having peptic ulcer meant living with a chronic condition for several years or even a lifetime. But today, with a better understanding of the cause of stomach ulcer and how to treat them, there is hope for most patients to be cured.

Yet interesting news on the subject is that a new yogurt that fights the bacteria causing gastritis and stomach ulcers which most researchers describe as almost vaccine-like effects, has been found by the scientists in Japan. It has been reported in the 237th National Meeting of the American Chemical Society.

This yogurt is already available in the store shelves in Japan, Korea and Taiwan. With this new yogurt, people can enjoy the taste of yogurt while preventing or eliminating the bacteria H pylori that cause stomach ulcers. Although, it is true that this yogurt appears less effective in reducing the levels of H pylori, it is a lot easier to take than medicine and can be eaten daily as part of regular dietary routine. There are not any apparent adverse side effects of this yogurt consumption.

Top of the Page: Causes of Stomach Ulcers
Popularity Index: 100,570