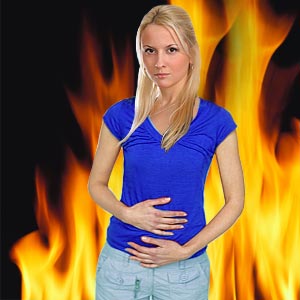 Acid Reflux syndrome is neither indigestion nor heartburn but closely mirrors both. Many people opine that this is one condition that keeps them away from enjoying the goodies of life... Be it chocolates, pizzas or a sumptuous meal. Tomatoes set the syndrome off, along with other spicy food and fats. Ice cream, baked goods and candies cause a negative reaction in those with acid reflux syndrome. There is a direct connection between the foods one consumes and the acid reflux.

It is estimated that about fifteen million Americans suffer from chronic heartburn. According to the US department of Health and Human Services, seven million people suffer from severe acid reflux in the US alone. Bare facts indicate that in 2002 about 710,000 people were hospitalized due to acid reflux and other esophageal disorders and children aged 3 to 7 years are victims of acid reflux syndrome between 2 to 8% of the time.

What is Acid Reflux Syndrome ?

Most people at some point of time experience heartburn. Bitter, sour or acid taste is noticed in the mouth. At times, partially digested food or liquids seem to be move from the stomach back toward the mouth. One of the most common symptoms of acid reflux syndrome is intense heartburn. Stomach problems, consistent cough and hoarseness in the throat, a roughened voice, sour and bitter taste in the mouth, problem in swallowing, painful burning sensation in the chest and throat, asthma and in some cases dental erosion are symptoms of this disorder.

Factors causing acid reflux syndrome include eating sumptuous meal, lying down within two to three hours of eating, consuming drugs like diazepam, meperidine, theophyilline, morphine, prostaglandin, calcium channel blockers, nitrate heart medications and anticholinergic and adrenergic drugs. Under these conditions, the lower esophageal sphincter (LES) which is usually tightly closed, opens and food from the esophagus is allowed to pass on to the stomach.

Eating greasy foods, chocolates and peppermint can also cause acid reflux. In addition, caffeine, alcohol and nicotine can also aggravate acid reflux. Pregnancy and obesity can increase abdominal pressure and increase the risk of acid reflux as well. Digestive disorders such as peptic ulcers, insufficient digestive enzymes in the stomach can also cause stomach acid to build up and back up into the esophagus.

X rays on the patient after consuming barium solution, esophagascopy, tissue biopsy for evaluating Barett's syndrome, esophageal manometry for measuring lower esophageal sphincter pressure and Bernstein test for measurement of acidity in the esophagus are some of the tests used by a gastroenterologist to diagnose a patient with suspected acid reflux syndrome.

If left untreated for long, the syndrome could become more severe and life threatening like Barett's Esophagus which is construed as a precursor to esophageal cancer. The main goal of treatment for acid reflux is the relief of symptoms and prevention of relapses.

If left untreated, this syndrome can lead to severe complications such as erosive esophagitis, esophageal stricture, ulceration or Barett's esophagus. It may also eventually lead to esophageal cancer. Esophageal cancer is the fastest growing and over 4,000 people develop this because of the acid reflux in their bodies.