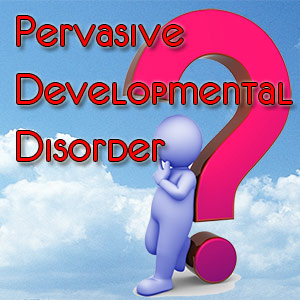 Pervasive developmental disorder is an umbrella term used to refer to a group of developmental disorders of the brain function. Read on to learn more about typical symptoms that can help a parent identify them and take professional advice to evaluate the condition and suggest suitable therapies.

The term Pervasive Development Disorders (PDDs) is an umbrella term used to refer to a group of developmental disorders of the brain function. These cover the whole family of autistic spectrum including Asperger syndrome, Heeler's syndrome and Rett disorder. As PDD covers such a wide spectrum, it is exhibited differently from child to child.

Children with these disorders are often confused in their thinking and they have problems understanding the world around them. Since these conditions are identified in children around 3 years of age, which is a critical period in the child's development, they are called development disorders. Even if the condition begins earlier than 3 years of age, parents often do not notice the problem until the child is a toddler who is not walking, talking or developing as well as other kids of the same age.

General signs and symptoms of PDDs

PDD is commonly identified in toddlers and mostly boys from 18-30 months of age:

While researchers are looking for answers to PPDs, some studies suggest that this is a problem of the nervous system, brain and spinal cord. Secondary causes include prenatal difficulties, phenylketonuria, viral encephalitis etc.

There are five types of pervasive development disorders which include:

Autism: with children having problems in social interactions, pretend play and communication. They exhibit a limited range of activities and interest and nearly 75% of children with autism also have some degree of mental retardation.

Asperger's syndrome children have difficulty with social interaction and communication and also have narrow range of interests. These children, however, have average and above average intelligence, and they develop normally in areas of language and cognition. They have difficulty in concentration and have poor coordination.

Rett's syndrome children present symptoms of associated PDD and suffer from problems of physical development such as motor or movement skills, difficulty in walking and use of their hands and poor coordination. This syndrome almost always affects girls as it is linked with X chromosome.

Childhood disintegrative disorder is a rare condition and children with this disorder begin their development normally in physical and mental areas. A child with this disorder tends to lose many of the skills between 2 and 10 years of age. In addition to the loss of social and language skills, the child may lose control of other functions including bowel and bladder control.

Pervasive development disorder not otherwise specified category is used to refer to children who exhibit severe problems in communication and play.

Much of the diagnosis depends on the accurate developmental history and evaluation of the current functioning of the child. Complete medical history and physical exam is done for a complete evaluation by doctors. Although there are no laboratory diagnosis in PDD, various blood tests and X rays are done to determine if there is a physical disorder causing these symptoms.

In the absence of any physical disorder, the child is referred to a specialist in childhood development disorders such as psychiatrist or psychologist, pediatric neurologist or other professionals trained to treat PDDs.

Inputs from the parents of the affected child, his/her teachers, and other adults who are familiar to the child are sought. Parents require ongoing counseling and support and they must understand that they are not responsible for the child's condition.

It is estimated that PDD occurs in occur in about 5 -15 children per 10,000 births. It is more common in boys than in girls with the exception of the Rett's syndrome which occurs in girls.


Sometimes multidisciplinary treatment approaches are utilized as needed to address the individual needs of each child. Such treatment included speech therapy, occupational therapy and training in social skills and behavioral therapy.

Specialized behavioral and educational programs, behavioral techniques, are adopted. Some PDD children may require specialized classrooms which are highly structural and provide attention to child's specific academic needs. Special education structured to meet the child's unique needs should be planned. Strategies for supporting positive behavior of the child are planned.

Intervention planning should be a cooperative effort of parents, healthcare providers and teachers. Better socializing and communication and reduced behaviors that can interfere with learning and functioning should be planned. Speech, physical and occupational therapies are designed to increase the child's functional abilities. There are no drugs to treat PDD and medications can be used to treat specific symptoms such as anxiety, hyperactivity and behavior that may result in injury.