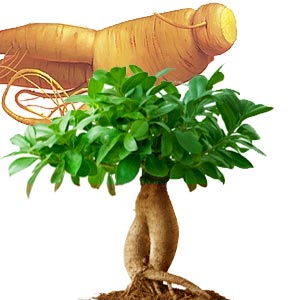 Ginseng is often construed as a panacea for all illness, partly because the shape of the root resembles a human body. Find out the properties of Korean gingeng, American ginseng and red ginseng that make it indispensable in alternative medicine therapies. Find out the contraindications of using ginseng with some medications.

Ginseng is often construed as a panacea for all illness, which possesses unique 'all healing' properties. This is partly because the shape of the root resembles a human body, and ginseng is the prized revitalizer for the whole body.

While Panax Ginseng has been used in Asian culture as an aphrodisiac for over 5000 years, it has become dear to the Western society fairly recently. Ginseng is primarily a plant with multiple components. It is largely used in the preparation of teas, powders and capsules. It contains saponins or soap like materials which have been named with various numbers and letters such as Rg1.

It is the steroid-like compound called 'ginsenosides' which makes ginseng so active. Ginseng contains other compounds containing hydrogen, carbon and oxygen in the proportion C42H72O14.

Panax, which is derived from the Greek origin meaning all healing, is also the Asian, Korean and Chinese type of ginseng. Panax quinquefolius is the American, Canadian or North American ginseng.

Ginseng is popular for its 'yin' and 'yang' effects. While American ginseng has 'cooling properties'- yin effects, thereby making it valuable in the treatment of fever and respiratory tract disorders, Korean and Chinese ginseng has the yang or 'heating' properties which help improve blood circulation.

Ginseng is often classified as an 'adaptogen', which means that the herb has an innate ability to make the body adapt to stress and fatigue. Some find ginseng helpful in improving endurance, coordination and reflexes.

The name red ginseng is derived from its appearance after the root has undergone a specialized preservation method. Quite similar to the Asian ginseng, the red ginseng root is grown, harvested and processed primarily in South Korea and China. The plant has bright green rounded leaves with greenish yellow flowers and round red berry fruits.

Red ginseng takes years of process in the making. The mature root is harvested, washed, inspected, cured and peeled intact and then sun dried or steam dried, the latter being preferred of the two. Even during the drying process, the roots are systematically steeped in secret herbal recipes and this causes the roots to become brittle in nature. The steam curing with the peel is what makes the root get its reddish-orange color.

Korean red ginseng has earned a prominent position in the medical field, almost indispensable in alternative medicine therapies. Of all its curing abilities, ginseng is best known to alleviate erectile dysfunction. Ginseng contains ginsenosides, which is a natural steroid that can directly stimulate the central nervous system. Red ginseng is a proven alternative for increasing sexual performance and stamina.

Korean red ginseng is a herb and can be taken in its natural form. It can be consumed as a dietary supplement and it is safe and beneficial for both men and women.

American ginseng or Panax quinquefolius is called Huaqishen in Chinese. It is an herbaceous perennial in the ivy family. Native to eastern North America, it is also cultivated beyond its range in places such as China.

The American ginseng plant has leaves that grow in circle around a straight stem. Yellowish green umbrella shaped flowers grow in the center and red berries are produced, similar to Asian ginseng. The American ginseng is not ready for use till it has grown for 6 years. It is therefore expensive and is rare in the wild.

American ginseng has become very popular and been over-harvested, making it rare in most parts of the United States. Presently, it is grown commercially under artificial shade in fields in Wisconsin and Minnesota and harvested after three to four years when ripe. Ginseng is also widely grown in British Columbia, and Ontario, Canada.

In America, ginseng products are made from long thin offshoots called root hairs. Ginsenosides and polysaccharide glycans are the main chemical ingredients of American ginseng and this seems to be more relaxing than Asian ginseng which may have stimulating effects.

American ginseng is available in water, alcohol or alcohol liquid extracts, in powders, capsules and tablets. It is also found in several combination formulae.

Traditional Chinese herbalists have used ginseng for several centuries to rejuvenate and to ward off ailments. Ginseng helps one to cope better with anxiety and stress, enhances the natural immune system and aides concentration and vitality.

Cancer: Studies on Korean red ginseng and cancer cells reveal that ginseng helps in lowering the chance of relapse for those recovering from gastric cancer.

Diabetes: Similarly, in another study, Panax ginseng in dosages of 100 and 200 milligrams were given to 36 subjects with newly diagnosed non insulin dependent diabetes. Significantly, after a period of eight weeks, there were improvements in fasting blood glucose level. The mood of the patients and psychophysical performance was also improved.

Attention deficit hyperactivity disorder (ADHD): An inconclusive research shows that American ginseng in combination with ginkgo biloba may aid in the treatment of ADHD.

Immune system enhancement:: Some scientists opine that American ginseng can help body fight off infection and disease. It helps to improve the cell function and plays a role in immunity.

The use of this age old herb ginseng may be in keeping with the time honored approach of strengthening the body and treating a disease. However, herbs contain active substances that can trigger side effects, such as nervousness, agitation, insomnia, diarrhea, headaches, high blood pressure and palpitations.

Panax ginseng is found to decrease the rate of heart beats. It should not be used by people with known heart disease unless under medical supervision.

It is imperative that pregnant and nursing women avoid ginseng. This is because ginseng has an estrogen-like effect. Similarly, women with a history of breast cancer should not take ginseng.

American ginseng is not recommended for use in children except under pediatric advice and care. Chances are ginseng may worsen insomnia. Above all, ginseng tastes unpleasant to many.

Ginseng tends to increase the effect of blood thinners such as heparin, aspirin and anti clotting drugs and this can result in uncontrolled bleeding or hemorrhage.

There is also the danger of ginseng increasing the risk of bleeding when combined with herbs like devil's claw, danshen, eleuthero, garlic, horse chestnut, papain, red clover and saw palmetto.

Drugs like theophylline and others taken for asthma when combined with ginseng intake can affect heart rhythm and increase potential side effects.

There is a danger of Panax ginseng interacting with insulin and other drugs for diabetes such as glucophage and glynase.

Ginseng can affect levels of neurotransmitters that carry messages from nerve cells to other cells and may interact with anti psychotic drugs such as chlorpromazine and fluphenazine.

There is a danger of ginseng stimulating central nervous systems and increasing the effects of prescription drugs for hyperactivity disorder, narcolepsy and obesity. The combinations may tend to increase heart rate and blood pressure as well.

It is essential that the doctor is consulted before taking medications (drugs or herbs) along with ginseng. Ginseng increases the side effects taken with MAOIs which is a type of antidepressant. Ginseng reacting with phenelzine can stimulate headaches, tremors and mania.

Anti psychotic medications are bound to increase the effects of medications used to treat psychiatric disorders such as schizophrenia and bipolar disorders.

Before purchasing ginseng, ensure that it is type you are looking for. If it is the Asian type that one is looking for, it should be the Korean red or Panax ginseng. In case it is American type, it should read Panax quinquefolius, Eleuthero, which is sometimes called Siberian ginseng.

This third type is not ginseng at all. It does not have the same active ingredients of Asian or American ginseng. But it may be found in pharmacies or health food stores and one needs to be aware of such usage.

As ginseng is a 'cycle' herb, it should not be taken consistently for long periods of time. After few weeks, you should go on 'ginseng free' weeks as extended use can lead to the same side effects that strong doses of ginseng can cause.