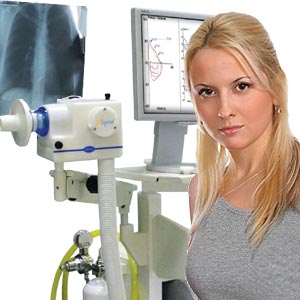 With every breath we take, we breathe life into our bodies. At the essence of it all, our lungs feed oxygen to the various parts of our body ensuring that they function as they must. But our lungs are perhaps exposed to much more than most of our internal organs. Some of us abuse it by smoking, while for others work hazards pose a threat to their well being. And there are those who suffer from chronic illnesses such as asthma, reasons for which are rather uncertain.

When it comes to detecting diseases or malfunctions of the lungs, technology today provides for several tests that verify pulmonary function and lung volume. These lung function tests are not without risk and knowing what they do and why you might need one is essential to those who have been advised to undergo such a test.

What do lung function tests do ?

Lung functions tests are mainly diagnostic tools that measure the various functions of the human lung. The main type of lung function test is called Spirometry (named after the spirometer, the instrument used in these tests). These tests help determine how your lungs are performing with regard to how well they process the air that we take in and if they are distributed well through the body. Lung volume or lung capacity is also measured through lung function tests. Other tests also help determine any physiological abnormalities of the lungs.

Lung function tests also help in the diagnosis of various respiratory disorders such as asthma and bronchitis. Conditions such as chest pain and shortness of breath may also be explored through spirometry. These tests are also used to determine the effects of medication on the lungs as also to examine the lungs of those who have been affected adversely by environmental factors or work hazards (coal mine workers or those who work with chemicals for example). In many cases, fitness for surgery or a procedure might be adjudged by a lung function test. Lung function tests help in checking for conditions like COPD (Chronic Obstructive Pulmonary Disease), sarcoidosis, asthma and lung tissue scarring.

Other breathing tests include:

Peak Flow Meter: This hand-held device aids in tracking breathing and is especially helpful to those suffering wheezing and asthma.

Lung diffusion capacity: This lung function test helps in gauging how effectively oxygen is passed from the lungs to the bloodstream.

Lung volume measurement: This breathing test indicates the amount of air left in your lungs after breathing out.

Spirometry is the most commonly used test to measure and evaluate lung functions, while there are several other tests that pertain to more specific diagnostic needs. In the spirometry test, lung function is observed as the patient breathes into the spirometer. The patient's nostrils are usually clipped and a tight mouth piece is used. The patient will be monitored by a trained professional and asked to breathe at various paces in order to measure various test parameters and also the capacity of the lungs.

Various gases such as nitrogen and helium at varying concentrations are used in order to measure these parameters as well. A spirogram can help in grading any abnormality and its severity as well as trend. Automated spirometry systems are also used to generate preliminary interpretation through built-in software.

Spirometry tests are used to look for chest deformities, diminished breath sounds, over inflation and cyanosis. This lung function test is prescribed for those suffering from chest pain with cough and wheezing.

What are the risks?

While taking the spirometry test it is normal to feel breathless and even a bit light headed. But other than that, there are no other risks involved in taking lung function tests. However collapsed lungs caused due to lung function tests have been reported, though very rare.

However, a lung function test is not to be taken lightly. So do ask your doctor any questions that you might have about the test and take all the precautions and follow all the instructions prescribed. Under the proper guidance of a doctor, these tests may provide the answers that may end much suffering.