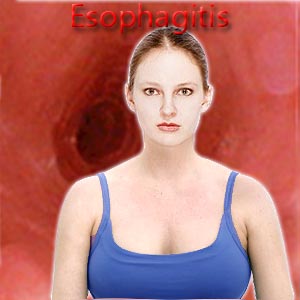 Left untreated, Esophagitis can lead to ulcers and in a rare situation even turn into a risk for esophageal cancer. Eosinophilic esophagitis is an inflammatory condition wherein the wall of the esophagus gets filled with large numbers of eosinophils.

Irritation leading to esophagitis may be caused by GERD, hernia, swallowing a toxic substance or oral medication. An auto immune disorder called eosinophilic esophagitis also causes this condition. Other common causes that can lead to the condition include excessive alcohol usage, cigarette smoking and chest radiation treatment.

Treatment for esophagitis depends on the cause, possible treatments include:

To ease the discomfort, some common lifestyle changes can be effected:

Reflux esophagitis is also known as Gastroesophageal reflux disease or GERD. It is a condition in which the contents from the stomach; like food or liquid leak back into the esophagus. This leads to irritation of the esophagus thus causing heartburn and other related symptoms.

No tests are required if symptoms are not severe. If symptoms are severe or if they occur even after treatment, one or more of the below mentioned tests may be ordered by the physician:

Eosinophilic esophagitis is an inflammatory condition wherein the wall of the esophagus gets filled with large numbers of eosinophils (a type of white blood cell). This condition is usually misunderstood for GERD as the symptoms for both the conditions are similar. Eosinophilic esophagitis is classified as a blood disorder and is considered to be food allergy. More common in men, it occurs in women too.

Eosinophils, in general, are not found in the esophagus. The eosinophils attack the lining and damage it. After a period of time, the inflammation could cause the esophagus to close up.

Eosinophils collecting in the esophagus cause problems all the way down the gastrointestinal pathway. This in turn makes the normal function of eating and digestion difficult and painful. Common symptoms reported include nausea, chest pain and difficulty in swallowing, cramping and abdominal pain. This usually results in diarrhea and weight loss.

Steroids are prescribed for esinophilic Esophagitis. Eliminate specific foods that cause allergic reactions.