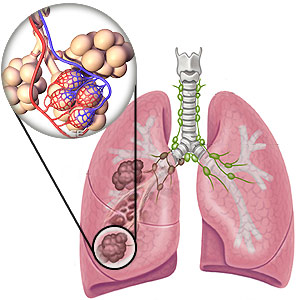 Emphysema is grouped under COPD as it destroys the lung tissue around the bronchioles thus preventing them from holding on to their functional shape upon exhalation. Oxygen supply to the body depletes with this condition.

A long term progressive disease of the lung, emphysema occurs when the alveolar walls of the lungs are destroyed. This reduces the total area within the lung where blood and air can come together thus limiting the possibility of oxygen and carbon dioxide transfer. In people suffering from this condition, lung tissues that support the physical shape and the functioning of the lungs are destroyed. Emphysema is classified under COPD or Chronic Obstructive Pulmonary Disease.

Emphysema is grouped under COPD because this condition can destroy the lung tissue around the bronchioles (tiny airways) thus preventing them from holding on to their functional shape upon exhalation. This will cause permanent damage to the tiny air sacs. In simple words emphysema is a lung disease that reduces the lung's ability to expel air, a process that is completely dependent on the lung's natural elastic property (the elastic property of the lung is retained by the tissues surrounding the alveoli).

Emphysema, the term is derived from the Greek word emhysan meaning inflate. Oxygen supply to the body depletes with this condition, breathing gets difficult as the fine tissues of the lung are destroyed. This condition results in large holes in the lung, obstruction of the airways, trapping of air and trouble exchanging oxygen as the elasticity of the lungs reduces. Emphysema is one amongst the major cause of disability and death in the United States. This condition leads to 100,000 deaths in the U.S. each year.

Emphysema is common in people aged 50 and older. A few, with inherited emphysema may develop the condition in their early thirties or forties. Men are more susceptible to emphysema than women but recent times have seen an increase in female cases as the number of female smokers has gone up considerably.

Cigarette smoking: Air sacs in the lungs produce macrophages (defensive cells) to eat away the particles inhaled while smoking. This helps the lungs but these macrophages in turn release a material that annihilates the proteins of the lungs (proteins help in expansion (elastin) and contraction (collagen).

Irritants entering the airways of the lungs

There is no permanent cure for emphysema. Treatment aims at slowing the development of the disease condition and to reduce the symptoms. Medications are prescribed for relieving symptomatic conditions. Patients suffering this condition must stop smoking.

Antibiotics: to contain infection, if any


Supplemental oxygen: when a person is not able to breathe completely, doctors recommend oxygen therapy so that the body receives sufficient oxygen

In people with emphysema, there is reduced vital capacity of the lungs (the maximum volume of air that can be forcefully expelled from the lungs at maximal inspiration). There is increased residual volume of air in the lungs after expiration.

In a healthy person the capacity of a normal lung is 99-100%. Human body can adjust to a mild drop in lung capacity but when the drop is severe, supplemental oxygen has to be provided to deliver oxygen to the body.

People with emphysema are at higher risk to develop lung cancer. But this does not mean that all people with emphysema will develop lung cancer and vice versa. A person may develop one of these conditions or both. One condition does not lead to the other or make the other more likely to occur. Cigarette smoking can cause these conditions and there are no warning signs that precede either condition.