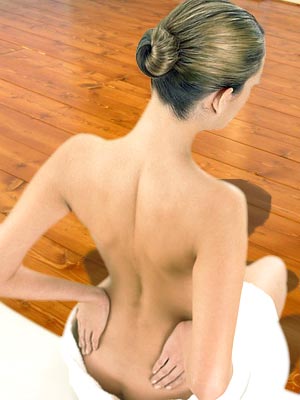 Disc herniation occurs when the spine presses on the nerves around the backbone. This is sometimes incorrectly referred to as ruptured or slipped disc.

The spinal disc is a soft 'cushion' between the bones of spinal vertebrae. Herniated disc is common in the lumbar spine, the part of the backbone between bottom of the ribs and hips.

The term 'herniate' means 'to bulge' or 'to stick out'. When disc herniation occurs, the cushion that sits between the spinal vertebrae is pushed outside its normal position. Disc herniation occurs when the spine presses on the nerves around the backbone. This is sometimes incorrectly referred to as ruptured or slipped disc.

Usually patients with back pain, leg pain, weakness of lower back muscles are diagnosed with a herniated disc.

What happens in disc herniation?

Chances are the spinal disc becomes rigid with age. While in young individuals the disc is soft and elastic, it tends to gradually lose its elasticity and become more vulnerable to injury. In about 30% of people, even in individuals around the age 30, MRI shows evidence of disc deterioration.

When the spinal disc becomes less elastic, it can rupture. The spinal nerves and spinal cord can become pinched when the herniated disc bulges out between the vertebrae. Certain activities like sitting, driving, bending or coughing and sneezing can worsen the pain as pressure is applied on the nerves when one makes movements.

A medical practitioner examines the patient physically and tests for sensation, muscle strength and reflexes. MRI is commonly done to diagnose a herniated disc. The MRI may show abnormalities of the lumbar spine in people as they age. In patients in their twenties, MRI reveals signs of disc wear. Physical examination findings, MRI readings and X-ray opinions help the physician come up with a treatment plan for patients with a herniated disc.

Often the line of treatment depends on numerous factors including symptoms exhibited, age of the patient and activity level.

It may take several weeks for the pain to slowly dissipate after surgery for a herniated disc. Pain around incision is common. This can be controlled through medication. In some cases, a lumbar corset brace helps to relieve pain.

While gentle and mild activities like walking or sitting upright are encouraged after surgery, patients should avoid lifting heavy objects, bending or twisting the back. Strenuous exercises should also be avoided till such time advised by the doctor.