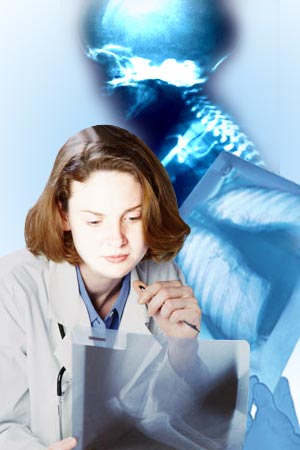 Learn about bone density tests that evaluate the mineral density in your bones and thereby understand their strength.

Osteoporosis thins your bones and makes them susceptible to breakage. A bone density test is a screening technique. Bone mineral density (BMD) test is a noninvasive test that determines your bone strength. Early onset of osteoporosis can be detected by decreased density of normal bone. Typically mineral density in the bones of women increases till about 35 years.

With the onset of menopause, bone mineral density sees a sharp decline. Building a high overall bone density helps in warding off osteoporosis in later years. Bones tend to become porous when calcium is depleted faster from the bones than it is added. The loss of bone density cannot be detected by regular x-rays.

The bone density data is interpreted in comparison with what is considered normal for a healthy young person. DEXA bone density tests use 2 different x-ray beams for calculating bone density. One energy beam is absorbed by soft tissue and the other by bone. When the soft tissue amount is deducted from the total, it gives you a picture of the person's bone mineral density. Bones with higher mineral density allow less of the X-ray beam to pass through them. DEXA uses lesser radiation than ultrasound testing.

Bone mineral density tests help in assessing your bone health as well as the rate of bone loss in case you are already suffering from osteoporosis. Bone density accounts for about 80 % of the strength of your bones. Bone mineral density tests calculate a person's T score. This is compared against WHO standards. The T score is compared against optimal bone density and is expressed as number of standard deviation below the average.

A Z score is calculated to compare your bone mineral density against others of your ethnicity, weight and age. This score can help in determining any unusual causes of low bone density.

Who must take a bone density test?