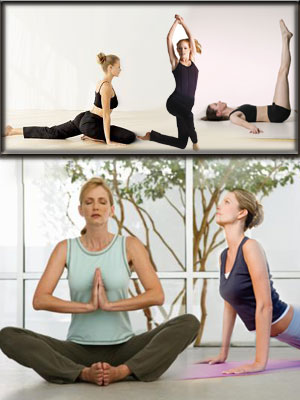 Power Yoga connects the body, mind and spirit at their deepest levels and helps the practitioner with many physical and mental benefits.

Power Yoga is the right combination of flexible and strength training coupled with the traditional yogic Surya Namaskar moves. Power yoga is often used to describe vigorous fitness programs modeled on the Ashtanga style of yoga.

The term Power Yoga came into usage in the mid 1990s when Ashtanga Yoga became more accessible to a western audience. This was when people began to look at yoga as a concept to work out. New Yorker Beryl Bender Birch and Los Angeler Bryan Kest are often credited with near simultaneous development of Power Yoga. Both of them have studied under the famous Ashtanga master Sri.K.Pattabhi Jois. Baron Bapiste is another name often associated with Power Yoga.

Why call it Power Yoga?

Power Yoga focuses on connecting the inner core of Power by recognizing the strength and health of one's body. Physical Power is recognized by developing strength and health for the external body. Physical tensions and energy blocks are released. Beyond the physical, power yoga pursues challenging postures and sustains the person in long holdings. Mental power is focused, drawing the mind away from scattered thoughts thereby striving to concentrate. Above all, spiritual power is sought in Power yoga, thereby going beyond the Physical and Mental powers.

Power yoga appeals to people who enjoy exercising. It is for vigorous exercise lovers who are already quite fit and who do not want to get into chanting and meditation, an integral part of the traditional form of yoga. Athletes especially sports person involved in skiing, surfing, running, martial arts, cycling, spinning and team sports immensely benefit from power yoga. However, different Power yoga programs are available for beginners, intermediate and advanced levels depending upon the fitness and flexibility levels. Power yoga should be done after consultation with the doctor.

Power Yoga is often described as the Ashtanga of the west. Unlike Ashtanga, power yoga does not follow a series of poses. Similar to Ashtanga, power yoga also emphases on strength and flexibility in movements. Power Yoga places great emphasis on the development of a person's physiological flexibility. Power Yoga is primarily done through a series of poses like other typical yoga. Proper breathing pattern is essential. Grace and unity is stressed throughout the breathing exercises.

Power yoga involves Surya Namaskar (Sun Salutation positions) which consists of a series of twelve exercises. These involve specific breathing patterns in a continuous graceful sequence and expansion and contraction of muscles of the ribcage and the waist. This aids in making the spine flexible and trims inches off the waist. There are different modules in Power Yoga making for a dynamic workout. One asana is followed by another typically to enhance strength training.


The movements in Power Yoga may seem soft and free flowing, much like a trancelike dance. The practitioner has to push every limb to its maximum limit and still maintain inner peace and concentration. Warm up sessions are typically considered before actual performance of power yoga as it aids relaxation. It should be interesting to know that power yoga is often done in heated room simply to allow the body to gain increased flexibility.

A rigorous routine of power yoga for about 45 minutes is recommended thrice a week. The yoga program can be alternated with other regular cardio and weight workouts.