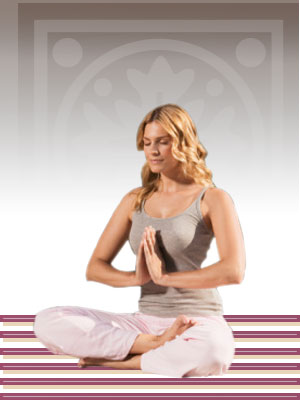 Kundalini yoga goes beyond the physical poses and the strong emphasis is on breathing, meditation and chanting. This type of yoga is therefore only for those who are willing to undergo both mental and physical challenges.

Kundalini refers to the potential form of 'prana' or the 'life force'. Kundalini in Sanskrit literally means 'that which is coiled' but is mostly used as a metaphor to describe the powerful energy that exists within the human body. This yogic branch concentrates on the psychic centers or chakras in the human body. In Yogic practice, the term Kundalini refers to the power residing in 'Muladhara chakra', the primary chakra.

Kundalini yoga goes beyond the physical poses and the strong emphasis is on breathing, meditation and chanting. Kundalini sequences are also physically intense. This type of yoga is therefore only for those who are willing to undergo both mental and physical challenges.

Although Kundalini yoga is an ancient form of yoga, it has been introduced and practiced in the west quite recently. Records reveal that Kundalini yoga was considered dangerous practice and was historically practiced in secrecy. The knowledge of yoga was passed on from the Guru to his disciple only after a long initiation process.

It was in 1969 that Yogi Harbhajan Singh founded the Healthy, Happy and Holy organizations 3 HO to introduce Kundalini to the broader population to enable them enjoy the benefits. Harbhajan Singh Yogi traveled widely in the Himalayan Mountains seeking out reclusive yogis to collect first hand knowledge of the kriyas and Pranayama exercises. These he later taught in the west.

Movement is linked with breath in Kundalini Yoga. Although this yoga is primarily physical, it derives benefit from an inner experience. Practice of Kundalini yoga is said to awaken the untapped potential within the human body. Stimulation of energy through the various chakras in the body paves the way for enhanced intuition and mental clarity.

Asanas in this form of yoga go beyond the stretching and breathing patterns but instead focus on intense concentration so to as promote spiritual growth. Specific breath sequences are to be done with poses so as to release energy in the lower body and intensify the effect of the asanas.

The practitioner may experience heat developing in the body. At such times, it is recommended to go slow on the exercises for a couple of days. Some may experience tingling sensations in the spinal column, palms of the hands or soles of the feet due to energy rising and freely circulating and opening the sleeping chakras. Negative thoughts and a desire to express violent emotions may also develop in some performers. This can be construed as part of the energy rising and cleansing process. However the yamas and niyamas must be controlled and practiced strictly.

Common manifestations of a raised Kundalini

Some experience certain psychic perceptions and out of the body experiences. Others notice energy rushes, intense heat and cold, involuntary body movements and hyperactivity. A raised Kundalini can also lead to emotional outbursts, heightened awareness and diminished or intense sexual desire