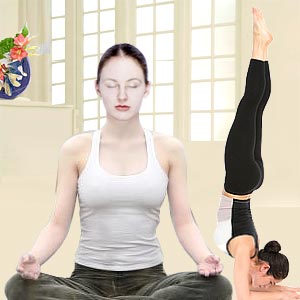 The ideology behind hot yoga is that it helps the practitioner sweat out toxins profusely while indulging him/her deeper in the asanas. Read on about the benefits of hot yoga and the calories burnt with hot yoga.

Yoga is a great way to burn calories and stay in shape. It increases flexibility and overall wellness of the body and mind. Today, intense yoga workouts are growing in popularity. Hot yoga is one amongst them.

As the name suggests, hot yoga refers to yogic practices performed in a room heated up to 110° F. The ideology behind hot yoga is that it helps the practitioner sweat out toxins profusely while indulging him/her deeper in the asanas. Read on about the benefits of hot yoga and the calories burnt with hot yoga.

Drawn from various forms of yoga including Hatha and Vinyasa, hot yoga is practiced in many styles. The common styles of hot yoga include:

Among these, Bikram is the most commonly practiced hot yoga across the world. In 1973, Choudhry Bikram, practiced this form of yoga after an injury that shattered his knee. Doctors said he would never walk again. However, after intense yogic practice, he started walking again in six months.

He formulated hot yoga to mimic the climate of India, the birthplace of yoga. Most of India is tropical or subtropical and the summer temperatures can exceed 122° F while the rainfall can be 59 to 79 inches per year. His yogic method gained momentum over the years and paved way for several other methods of hot yoga. Bikram's hot yoga follows a sequence of 26 postures and focuses on endurance.

Heat: The room is heated to a temperature of to 43° C (85° to 110° F) while the humidity is maintained between 40% to 60%. The heat in the room warms the muscles and induces sweat. As the heat increases the pulse, the body burns more calories in its efforts to stay cool while exercising. Moreover, heat widens the capillaries, which distribute oxygen more effectively to tissues, muscles, glands and organs, to remove toxins.

Sweat and Detoxification: Excessive sweating cools overheated body through evaporation. It is claimed that hot yoga can remove waste from the body on a surface level (such as smog and dust from the pores) and an organic level (by carrying waste away from kidneys and liver).

Focus: Hot yoga helps to stay in focus by helping the body to stay cool in a heated environment and the mind to fight for focus in a challenging environment.

Breathing: Similar to any other form of yoga, hot yoga emphasizes on breathe or prana. Apart from calming the mind and body, deep breaths helps oxygen circulate through the body.

You may wonder why people would deliberately put themselves into a rigorous yoga practices in a heated room. The key is quicker results. It is claimed that hot yoga provides actual benefits of yoga in a quicker pace. This has made this form of yoga popular among many. Few benefits of hot yoga include:

Improves blood circulation: Hot yoga improves the supply of oxygen to cellular levels; thereby increasing the circulation of blood to every cell of the body.

Detoxifies the body: A sequence of exercise and yogic postures generates enormous body heat. This released heat combined with the heat inside the room make you sweat profusely, thus releasing toxic and harmful substances from your body.

Beneficial for the muscles and heart: The exercise or yogic postures performed during hot yoga class works on each muscle of the body thus making them strong, agile and flexible. Hot yoga helps relieve stress levels thus lowering the heart rate and blood pressure.

Improved Metabolism: Hot yoga increases the blood circulation and the movement of oxygen through out the body cells, resulting in better metabolism rate.

Helps curing aches, injuries and arthritis: As a person enters the thirties, many joints, especially the vertebrae, stop lubricating. Yoga promotes joint lubrication, which can alleviate general feelings of stiffness and discomfort.

The calories burnt during a hot yoga session depend on the exertion during the poses. For instance, low intensity yogic postures burn fewer calories than high intensity yoga workouts.

Most of the hot yoga classes are created to combine yoga with other sources of workout that focus on heightened cardiovascular activity. Such classes may include a mixture of hip-hop, Pilates or just focus on the abdominal muscles.

Asthanga yoga and Power yoga, helps in burning up to three hundred calories per hour. Asthanga yoga is compared to a brisk walk with a quick pace. Power yoga involves quick change of positions that focus on intense breathing. This is claimed as the western version of the yoga and is preferred especially by intense yogic practitioners. Beginners may find it difficult to cope with power yoga because of the quick pace.

Vinyasa yoga can be compared to a moderate bike ride in terms of the calories burnt. This form of yoga focuses on the flow of positions, and quick changes in postures to promote blood flow through the body.